Another year, another flood for Houston’s Jews. What now? 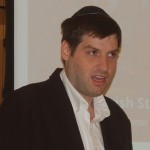 minent community leader, being rescued on a canoe. The image could subsequently be seen on Jewish news websites around the world. Today, Rabbi Radinsky is no longer with us. He died of pancreatic cancer in February. But the same heartbreaking images of local flooding have resurfaced, and I haven’t been seeing those photos pop up in as many places as they did last year.

That’s why I decided to take some time away from the U.S. presidential election, the Israeli-Palestinian conflict, and anti-Semitism on college campuses—among the other usual topics that a staffer at a nationally/internationally focused Jewish media outlet would cover these days—to write this essay. Even last year, it initially felt somewhat strange for me to “report” on a story taking place in my own community, a story that felt more like a life event than a news event. I had the same initial feeling this year, but I ultimately determined that silence isn’t the answer. The plight of Houston and its Jewish community is real, and intense. The Jewish future in a major city is at stake. I hope that my colleagues in this industry will take notice.