Most bat mitzvah projects involve fundraising or community service work that is laudable. When it came time for Penina “Penny” Berman to consider a project for her own upcoming bat mitzvah on February 8 at Congregation Gates of Prayer, she elected to go big or go home. 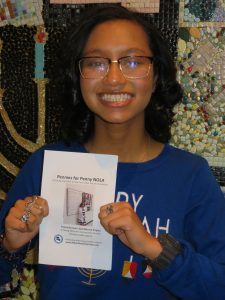 Berman, the daughter of Lt. Col. Carol Berman, an active member in the U.S. Army Reserves, was familiar with Fisher House, a non-profit organization that serves the needs of family members of military servicemen who have suffered injuries while on duty. The Fisher House, being constructed on South Galvez Street adjacent to the Veterans Hospital on Tulane Avenue, will provide a safe and comfortable place for the family members while the servicemen receive medical care at local facilities.

“Most of the time it’s more physical injuries that servicemen are directed to facilities for the specific surgery or treatment they require to heal,” Berman told the CCJN in a phone interview.

Knowing the mystical nature of the number 18, which is representative of the Hebrew letters that spell out the word “life,” Penny Berman decided her project would be to raise an impressive $18,000 for Fisher House.

Berman is asking for all donations to be made on the Fisher House’s website and to mark donations in the “Comments” field that show they are associated with her bat mitzvah project.

“We hoping to reach $18,000 by my bat mitzvah. However, because I connect to this project on a personal level, I would like to continue it even after my bat mitzvah.”

Since the fundraising is largely being housed on the Fisher House’s own site, there is no way for the public to check on the progress her project has made thus far. She estimates the campaign is between 10 and 15 percent towards meeting her goal.

“I have been keeping track and working very closely with the executive board of the Fisher House,” she noted. “Every donation – every amount of money – counts when it comes to helping the lives of people who protect this nation.”

Sheila Katz, the national CEO of the National Council of Jewish Women, will be the keynote speaker at the Greater New Orleans Section’s General Meeting on Thursday, January 23.