With its current production Pictures of Marilyn now playing weekends at BB’s Stage Door Canteen, the National World War II Museum has taken a bold step in a new theatrical direction. Courtney Boe, the blonde Victory Belle who has been a leading player in several previous productions including My Way: The Frank Sinatra Story, The Andrews Brothers and Thanks for the Memories: Bob Hope and His All Star Pacific Tour, takes center stage as the central star in this original work of drama, dance and song. 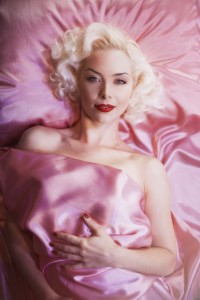 From the very first time she is seen as a wartime factory worker considering leaving her Merchant Marine husband to the final scene when she is at the top of her status as a cinematic star, Boe is generous as an actor and absolutely superb as a singer and dancer. She turns on the sexual nature of the Marilyn Monroe character when she needs to, quickening both the heart pace of the other actors on stage and those of the audience as well.

As bandleader Ray Anthony (Seth Lieber) mugs to the audience early in the 90-minute piece, “I bet you know who the standard is when it comes to blondes.” Clearly, if there were any role the diminutive platinum blonde Boe was born to play, it is certainly that of Marilyn Monroe.

The script, written by Cavan Hallman,  focuses on her early career and steers clear of many of the star’s problems including that of her dependence on prescription medication. There is no mention of her conversion to Judaism either. Instead, the dichotomy of her search for acceptance as a person and also as an actress and producer is at the core of the script.

Hallman also serves as the director of this work, which serves to tell the story of Hollywood’s biggest sex symbol in word and song. Standards from the swing and post-war eras like “Dreamer’s Holiday,” “Straighten Up and Fly Right,” “Jezebel” “Happiness Is Just a Thing Called Joe,” “This Will Be My Shining Hour” and “My Marilyn” are used to advance the plot, much like modern-day juke box musicals.

“When you’re as big as me, you should get what you want,” Boe claims in depicting the sex goddess. Yet, Pictures of Marilyn emphasizes the difficulties she had in being respected as she took on the studio heads of Hollywood, demanding more pay as well as script and director approval.

The cast of supporting players includes Curtis Billings in a dual role as comedian Bob Hope and Darryl F. Zanuck. As “Old Ski-Nose,” Billings gets to ask the question “Will you fly into a war zone with me, honey?” as he attempts to cajole her to join an upcoming U.S.O. tour to South Korea. Later, as Zanuck, he sings “Dance, Ballerina, Dance” as a helpless Boe as Monroe is forced to pirouette to his demands and iron-clad contract.

Boe’s outstanding voice and dance abilities go a long way to smooth out the rough spots in the book. Heidi Malnar also provides tremendous backing with her award-winning choreography, giving Boe, Lieber and others beautiful movement on stage.

Shauna Leone’s superb costume designs, especially for her rendering of several costumes intended to emulate famous outfits worn by Monroe in photo shoots or on stage, cannot be understated. They provide tremendous means for Boe to shine like the star she truly is.

David Raphel’s scenic designs and Tom Hook’s music direction also are noteworthy as is the overall support and guidance of Bob and Delores Hope director of entertainment Victoria Reed.

When the mash is all distilled down for the tasting, Courtney Boe proves to have the potent star power in her bearing, voice and ability to dance to guarantee that Pictures of Marilyn will forever stay etched into the memories of local theater lovers. She has obviously worked long hours to perfect this role and it shows.

Sadly, Boe has announced that this will be her last undertaking at the National World War II Museum as she evaluates where new opportunities for her career will take her. In a sense this production has been five years in being developed. Pictures of Marilyn is a batch of images not destined for a dusty album. It may well be that this is Boe’s breakout role. In any event it is truly worthy of being seen again and again.

Pictures of Marilyn plays at BB’s Stage Door Canteen on weekends now through November 27. The production can include dinner on Fridays and Saturdays or brunch on Sundays. For ticket information, click here.

(JTA) — Israel announced a temporarily entry ban for foreigners arriving from Africa following the detection of a resistant coronavirus variant that is sparking global concern.