For Congregation Gates of Prayer cantorial soloist Jordan Lawrence, her love of music and of Jewish liturgical music has had to an unexpected and strange nexus. Tonight she will skip her usual Friday night services role in order to don a nun’s habit and perform on stage as Sister Amnesia, one of the five starring roles in “Nunsense” being performed at Rivertown Theaters for the Performing Arts in Kenner. 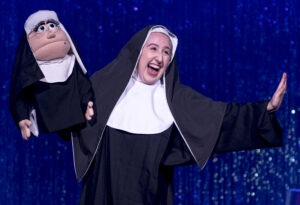 The show, which opened last night, is a musical comedy chestnut written by Dan Goggin and will be performed before a socially-distanced audience while adhering to all COVID-19 protocols. It runs through August 18.

Jordan says her religious upbringing was “all over the place.” A New Jersey native, she attended a Conservative Jewish Day School until 8th grade, but then became involved with a Reform temple pre-bat mitzvah. She was raised in an area with a heavily Jewish population.

Meanwhile, her older brother is a Modern Orthodox rabbi and mohel. “Judaism is very important in my family and in very different ways,” she told the CCJN in an exclusive phone interview.

Lawrence was inspired to be a part of the New Orleans Jewish community when she heard a story  from Lee Kansas, the former Southern Region president of Hadassah and longtime local Hadassah chapter leader.

“Come to New Orleans and bring your Jewish values,” Kansas had advised a Jewish tour group visiting post-Katrina New Orleans. A few years later, a young man attending a Passover seder at the Kansas home as part of her family’s outreach, admitted it was those words that made him want to be a part of the rebuilding effort.  That story had a major impact on  Lawrence.

Following her 2019 graduation, she worked as a teacher in the nursery school at the Uptown Jewish Community Center, while interviewing for other Jewish positions.

Lawrence was hired by Gates of Prayer just as the COVID-19 pandemic was in full lockdown, but her résumé already showed her commitment to the Jewish community. She worked with the Tulane Jewish Leaders program and was involved with both the Rohr Chabad Student Center at Tulane and the Goldie and Morris Mintz Hillel Center at Tulane.

Lawrence was hired to work with Congregation Beth Israel’s children during Shabbat morning worship services during her tenure at Tulane as a Musical Theatre major. She later started up a Jewish a capella group, the NJBeats, a group that garnered attention on and off the campus. NJBeats performed for Purim events at Beth Israel.

While enrolled at Tulane, she worked on a number of academic projects, but was not involved with as many shows as one might suspect. Because she was involved with the Young Judea camp movement at Camp Young Judea Sprout Lake during the summers of her Tulane years, she was out of town during the Summer Lyric Theatre at Tulane productions put on by the Music Department.

While at Sprout Lake, she rose to become the assistant director for performing arts in charge of musical theatre, music videos and was the steward of Israeli dance programs.

She did recall that one of her favorite roles at Tulane was as Logaine Schwartzandgrubenierre in Jewish playwright and composer William Finn’s “25th Annual Putnam County Spelling Bee.”

Prior to her hiring at Gates of Prayer, Lawrence did have a small role as Charlotte and as part of the ensemble in “Oliver!” in January of 2020. She was rehearsing a role as a member of the ensemble in the Jefferson Performing Arts Society’s production of “42nd Street” when the shutdown occurred.

Lawrence, who follows former longtime cantorial soloist Victoria Cohen May, has been encouraged by Gates of Prayer to continue to seek work as a performer with the caveat that it should not interfere with her usual duties at the Reform synagogue. May, who had performed on many local stages prior to her being named as the cantorial soloist at Gates of Prayer, made a conscious decision to distance herself from secular work during her tenure, she told the CCJN.

Jordan Lawrence, second from right, with the cast of “Nunsense” now playing. (Photo courtesy of Rivertown Theaters for the Performing Arts)

Lawrence is thankful for the time she spent with her predecessor, especially familiarizing her with the liturgical music for last year’s virtual High Holidays services. The fact that the two had enjoyed similar musical theatre experience was also significant to her.

Lawrence felt it was important to bring her own unique qualities to Gates of Prayer and see how see they would fit in so as not to attempt to emulate someone who was already important to the Jewish community. But, she added, the background in musical theatre has its decided advantages.

“I think there is some sort of a performance aspect,” Lawrence said about her job. “You need to be able to convey emotion while you are leading a community in prayer. You have to have some sort of ability to connect to people and that comes from and with performing.”

Lawrence also said she has been very cautious about COVID-19 protocols and was very impressed and comfortable during the rehearsal process at Rivertown in which everyone wore masks. Although two of the performances coincide with nights she would otherwise be helping to lead services with Rabbi David Gerber, they were able to arrange for her starring role.

The rabbi even promised he would be seeing the show.

“Thankfully, the synagogue was supportive and able to let me do this and pursue this passion of mine,” she concluded.

‘We will not allow any extremist element to undermine the quiet in Jerusalem,’ vows Netanyahu

(JNS.org) – Speaking at a special Cabinet session on Sunday to mark Jerusalem Day, Israeli Prime Minister Benjamin Netanyahu said “agitators” were behind the recent unrest in the Israeli capital, and issued a warning to terror groups in the Gaza