(JTA) — It has been more than 35 years since Harvey Fierstein’s “Torch Song Trilogy” opened on Broadway. At the time it was a theatrical revelation: Who could have imagined that the story of a young gay Jewish man’s quest for love and validation in a world that viewed him as an abomination would become such a hit?

Fierstein, who wrote and starred in the original production, won the Tony Awards in 1983 for best play and best lead actor, and rocketed to theater stardom.

The play is back on Broadway in a slimmed-down production — it’s over an hour shorter than the three-part, four-plus hour original and is just called “Torch Song.” It stars Michael Urie (of “Ugly Betty” fame) as Arnold Beckoff, a professional drag queen, and his performance is so funny, moving and sensitive that it could win him a Tony, too. It opens Nov. 1 at the Hayes Theater and will run through Feb. 24.

Among the play’s earliest fans, just before its original days on Broadway, was Moises Kaufman. These days, Kaufman is known for founding the Tectonic Theater Project, a company that has produced acclaimed off-Broadway plays such as “The Laramie Project” and “Gross Indecency: The Three Trials of Oscar Wilde.” Now he’s directing this version of “Torch Song.”

Kaufman, 54, was still a teenager when he caught a performance of the show by a touring company in San Francisco while on vacation from his native Venezuela.

“I want to believe it was bashert,” he said in a telephone interview, using the Yiddish word for “fated.” “I was very young and it had a very great impact on me because it spoke to my Judaism, it spoke to my gayness and it spoke to my desire to be an artist.”

The play was one of the reasons Kaufman set his sights on the New York theater world, a long way from his native Caracas, where he was born and attended a yeshiva through high school. His father emigrated there from a village along the Romanian and Ukrainian border when he was 20. He had survived the Holocaust through making and selling the yellow Stars of David that Jews were compelled to wear by the Nazis. In Caracas, he married a Venezuela-born daughter of immigrants from Kiev.

“Torch Song Trilogy” struck a chord with Kaufman on multiple levels. He calls himself still very “spiritually” Jewish today, and the show also has a very Jewish sensibility — from the Neil Simon-inflected humor to its multiple Yiddishisms.

In the show’s opening moments, Beckoff offers a funny and sad soliloquy admitting to himself and the audience that he just wants someone to say “I love you” and mean it. He ultimately finds that someone, though that ends badly — as does the visit of his widowed mother (Mercedes Ruehl), up from Florida, who still holds out hope that her son eventually will blossom into heterosexuality.

“Jews are people who understand about oppression,” Kaufman said. “It’s something you struggle with your whole life, something that never goes away. You internalize it.”

“Torch Song Trilogy,” he said, “was incredibly entertaining, and yet it could exist in the same framework that deals with very real and complex human issues.” 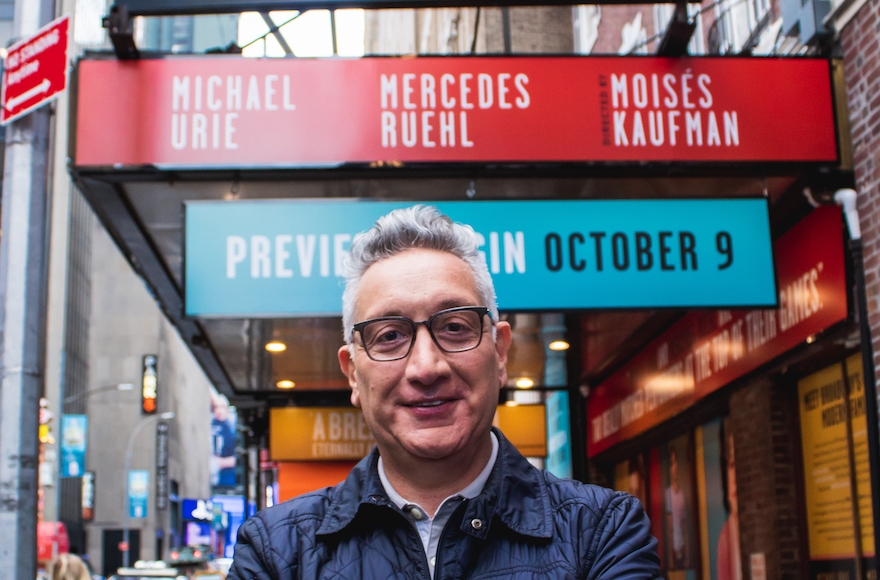 Kaufman in front of the Hayes Theater in New York City, where the play he’s directing will debut on Nov. 1. (Courtesy of Torch Song on Broadway)

“[Harvey] started talking in the play about what he saw in the future: gay marriage, gay adoption and [continued] gay bashing,” the Venezuelan director said. “He put it on stage and allowed us to see it and believe that it was possible.”

After attending New York University, Kaufman co-founded the Tectonic Theater Project in 1991 with Jeffrey LaHoste, his future (and current) husband. The TTP became one of many small theater companies in New York City that produces often nontraditional projects off- and off-off-Broadway. They are staffed by young writers, directors and actors seeking opportunities to strut their stuff.

Just a year later Matthew Shepard, a gay University of Wyoming student, was beaten, tortured and left to die on a fence pole in what was widely seen as a hate crime. The profits from “Gross Indecency” allowed Kaufman and members of the TTP to travel to Laramie and interview members of the community. Their subsequent work, “The Laramie Project,” became one of the most performed plays in the country, in both professional settings and in high schools and colleges across the country.

Kaufman has gone on to direct and write over a dozen other plays, and he won a prestigious Guggenheim Fellowship in 2002. In 2016, President Barack Obama made him the first Venezuelan to receive a National Medal of Arts. At one point Kaufman called himself “the hardest-working Jewish Latino gay artist in New York.”

Although it’s a coincidence that “Torch Song” opens almost exactly 20 years after Shepard’s horrific murder (on Friday, his ashes were placed in a crypt at the Washington National Cathedral), Kaufman said the anniversary serves as a reminder that the themes of Fierstein’s play continue to resonate.

“Many kids who come out to their parents today still get the same response that you see in the play,” he said.

Netanyahu said he would lift the construction ban on the Givat Hamatos neighborhood, giving the go-ahead for...
Continue Reading ⇒