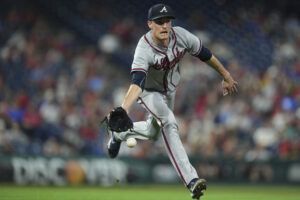 Max Fried #54 of the Atlanta Braves on July 25, 2022 in Philadelphia. (Photo by Mitchell Leff/Getty Images)

For the third consecutive season, Fried has been named the National League’s top defensive pitcher, beating out finalists Tyler Anderson of the Los Angeles Dodgers and Corbin Burnes of the Milwaukee Brewers. The award is given to the best defensive player at every position in each league.

Fried has established himself as one of the game’s best starting pitchers, and his 2022 performance only solidified that standing. Fried was named to his first All-Star team, while going 14-7 with a 2.48 earned run average, seventh-best in baseball. His wins above replacement of 5.9 — a sabermetric stat used as a catch-all for a player’s overall value — was tied for fifth best among all pitchers.

On the defensive side, Fried ranked third among all pitchers with three defensive runs saved, and tied for fourth with three pickoffs. Since his debut in 2017, Fried has 23 pickoffs, the most in the sport.

Finalists for the Cy Young award, given to each league’s best pitcher, will be announced Monday, and the winners will be revealed Nov. 16. While Fried is not expected to win — Miami’s Sandy Alcantara is the frontrunner — he may finish in the top two or three.

"It's as good of a pickoff move as there is."

Fried is the third Braves pitcher to win the award multiple times, joining legends Greg Maddux (10) and Phil Niekro (five). Last year, he also won a Silver Slugger award, given to the best hitter at each position — and with MLB’s newly instituted universal designated hitter, Fried is the last pitcher who will ever win the award.

(JNS.org) – “We strongly condemn the heinous terror attack that took place this evening at a synagogue in Jerusalem, and are shocked and saddened by the loss of life, including the killing of at least eight innocent victims,” White