FRANCES “FRANKIE” SONTHEIMER WOLFF of Dedham, MA., formerly of New Orleans, died peacefully  at her home on October 6, 2021 with her family by her side. She was 93. 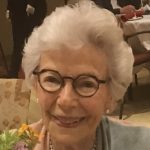 A New Orleans native, she enjoyed living in New Orleans for the first 81 years of her life. She graduated from Isidore Newman School, graduated from Newcomb College, and received her professional degree from the Tulane University School of Social Work.

Wolff was a generous donor and a passionate volunteer for many civic boards, but was extraordinarily well connected in her service to the New Orleans area Jewish community. She was a co-chair of the annual campaign for the Jewish Federation of Greater New Orleans in 1995.  For her work with Federation, she became a recipient of the Anne Goldsmith Hanaw and J. Jerome Hanaw Tikkun Olam Award in 2005.

She endowed Federation with its first Lion of Judah gift in 1996 and, as a result, was recognized with the Kipnis-Wilson/Friedland Award from the International Lion of Judah Conference held in conjunction with the 2006 General Assembly of the United Jewish Communities (now the Jewish Federations of North America) for her high standard of philanthropy and volunteerism.

The Jewish Endowment Foundation of Louisiana (JEF) also honored Wolff with the presentation of its Tzedakah Award in 2007. Because of her dedication and commitment to the Jewish Federation of Greater New Orleans, she also received the Roger Bissinger Memorial Award from Federation as the co-recipient of 2009’s top community volunteer.

Wolff moved to the Boston area in 2009. There she enjoyed living in and was a valued member of the NewBridge on the Charles senior community in Dedham, MA. Her pride in being a social worker and her philanthropic spirit continued through her last days as she gave freely of herself to others. Among the many projects especially dear to her heart in recent years were the NewBridge Volunteer Outreach Committee and its Dedham Food Pantry Project, the Home Start eviction prevention program and the New Orleans Women and Children’s Shelter.

She was predeceased by her daughter, Jackie Wolff, in 1978 and by her husband, Leonard M. Wolff, Sr., in 1990. She is survived by her children Len Wolff, Jr. (Robin) of Northern California and Sue Wolff of Boston, four grandchildren and two great-grandchildren.

A private graveside service at Hebrew Rest Cemetery No. 3 was officiated by Touro Synagogue Cantor Kevin Margolius on Sunday, October 10 at 1:00 p.m.

In lieu of flowers, the family requests that donations in Frankie’s memory be made to the Jackie Wolff Scholarship Fund at Touro Synagogue, 4238 St. Charles Avenue, New Orleans, LA, 70115; or to the H.E.L.P. Fund, or Congregation NewBridge, both at at NewBridge on the Charles, Hebrew Senior Life, 1200 Center Street, Boston, MA 02131