Rabbi Deborah Silver, the spiritual leader of Shir Chadash Conservative Congregation for the past six years, has been busy for much of the past month preparing for Shavuot, but also packing her belongings in anticipation of her return to Los Angeles, the place from which she received her rabbinic training. 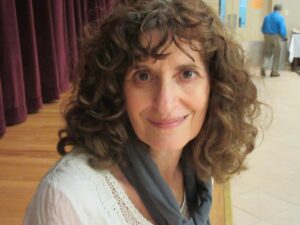 Silver, the first female Conservative rabbi to lead a Louisiana synagogue, is bittersweet about her impending departure from New Orleans, which culminates with A Very English Tea on Sunday afternoon at the Windsor Court Hotel from 3:00 – 6:00 p.m.

The event is a proper send-off from her congregation and her friends as they gather to celebrate her pulpit leadership and her legacy as a teacher. Her classes were frequently conducted at Shir Chadash for the benefit of learning for her own congregation members, but also included several classes taught in concert with Congregation Beth Israel Rabbis Gabriel Greenberg and Josh Pernick as well as Congregation Gates of Prayer Rabbis Robert Loewy and David Gerber,.

The CCJN conducted a phone interview with the rabbi last week:

CCJN: The purpose of these kinds of interviews are to reflect on some of the highlights of  your career, what you’ve done and where you’re headed, as well as to let people know a little bit more about you.

Silver: The first thing I would say is that I am headed back to Los Angeles (her pronunciation rhymes with “breeze”) to be close to family.

CCJN: Wasn’t your family living in England? Don’t you have family members there?

Silver: I do. But I also have a clan of 36 assorted cousins in Los Angeles, including some new children. So, I am going to go back to be with them.

CCJN: When you return, will you be involved at all with the your former seminary, the Ziegler School of Rabbinic Studies in Los Angeles?

Silver: No plans for that at this time, but I would hope there is something useful that I can do for them, yes. At the moment I don’t have any immediate plans to take another job. I am going to be giving myself the gift of a short sabbatical and then after that I’m going to be looking into teaching work – adult education work, working with people who are on their  journey into Judaism and working with the 50- to 75-years-old age bracket, which I feel is being a little underserved in the Jewish community. So, I propose to do a little bit of exploring there.

CCJN: You’ve taken part on the national level with the approval of several teshuvot (or official halachic positions) of the Conservative movement.  The position to allow “technology with limitations” at the High Holidays comes to mind and you’ve been responsible for other rulings, correct?

Silver: I co-authored (with Rabbis Guy Austrian and Rob Scheinberg) a teshuvah on non-binary Torah honors. It’s just been made into law and I’m very proud of that. A ruling once passed is available to be implemented or not by any rabbi of any particular community at their discretion. It takes six for a teshuvah to pass. On a committee of 25, this passed 24-0 with one abstention.

CCJN: For those who are uninformed, can you explain what it means.

CCJN: Despite your abilities, it might have been daunting to be the very first female rabbi at Shir Chadash.

Silver: I heard that I was able to change some peoples’ minds.

CCJN: Was being the first Conservative female rabbi a challenge or did you just get on with your job?

CCJN: In terms of some of the times our community endured, you were the rabbi during the Pittsburgh shootings. You were the one who had the entire community come to your synagogue. We met there to commiserate together. We prayed together. The officials from the New Orleans City Council and the Jefferson Parish Council were all there. It was your house that they came to.

Silver: It was our house because the synagogue in Pittsburgh was a Conservative synagogue. That’s how we made the decision in the (Greater New Orleans) Clergy Council and I can say we were honored to host that ceremony.

CCJN: But it was such a sad point among many.

Silver: I would say also, obviously, it’s been an eventful six years. We saw some significant staffing changes – that was COVID – and then there was the hurricanes.

Silver: On COVID, I would say, obviously, that the challenge, as for every other clergy person, is that “How do you maintain community when all of your primary ways of being a community are taken away?” I think Shir Chadash proved itself inventive and resourceful over the course of that time. i would like to say how grateful I am to our Health Committee, who really went above and beyond the call of duty in advising the synagogue and who have kept us very safe.

CCJN: Being inventive and resourceful meant applying technology in a way it had never been considered before.

Silver: Obviously, the whole question of what to do with technology also came up for consideration. I hope we found a happy medium that my successor, Rabbi Scott Hoffman, is going to be able to work with as he wishes.

CCJN: You got to meet with Rabbi Hoffman last week, right?

Silver: I did hand over meetings with him.

CCJN: Rabbi Hoffman previously served here, so he knows many of the families and players and knows what New Orleans is all about. Being someone who was not exposed to the culture of New Orleans earlier, what are you going to take away from New Orleans when you go to Los Angeles? What will you bring with you aside from your dog?

Silver: (laughing) Obviously, I will travel with the dog.  (pausing) I don’t want to anticipate my final sermon, but New Orleans leaves you with certain gifts, some of them wished for – like being able to experience Mardi Gras and Jazz Fest – some of them unwished for – like hurricanes and the resilience that you develop by going through them. I have been involved I’d say with some unique life cycle events in this community. It’s ironic that almost as soon as I am done here, the Community Mikvah should be opening.

Silver: But I have conducted conversions in Houston, in Atlanta, off the end of a boat and on Pontchartrain Beach! And each of them have been unique and uniquely meaningful. That’s definitely a set of memories that  I am going to take with me and I’m proud to have welcomed so many people. I also discovered – thank you to Rabbi Gabe Greenberg for pointing this out to me – that the best kind of handkerchief to wave at a second line is a tallit. (Pause) Everyone gets out of the way when you’re waving a tallit!

Silver: So, there’s been these unique experiences. Also, there’s been the compassion of people who have been ensuring that I had somewhere to live when the parsonage was damaged in the hurricane. For that I’d like to shout out my friend Susan Kierr and her partner David Curney. I’ve been living next door to them in Mid City since January, so I’ve been out of the suburbs – I’ve had a very New Orleans experience, which has been great.

CCJN: Aside from that final sermon, we must assume you are looking forward to that “tea” on Sunday.

Silver: Oh, yes, very much. People have been immensely generous and positive about that. I feel treated, very feted.

CCJN: Because of your British background, it’s so apropos. Again, part of what New Orleans does is that they really do know how to give a good party.

Silver: That’s a good question. I’m sure there’s something. (Thinking) I don’t know. Maybe there’s less than I think. Maybe, a Shabbat service on the grounds of Jazz Fest. I don’t know how feasible that was. In terms of stuff that I’ve been able to do while I am here, as I’ve said,  I’ve laid stress on the sort of life cycle, personal relationships things. Doing weddings. Brit milah. Not me personally doing brit milah, but trying to make Jewish things happen for people in the community is less straight forward than elsewhere, but very, very rewarding, very meaningful when you get it done. In terms of what I leave behind, I hope people will affectionately remember (me) when I’ve touched their lives.

CCJN: Should we assume you will return to the city one day? Perhaps to see the mikvah or to visit with friends?

Silver: Sure. Sure. Nothing right away, obviously. You don’t want to be knocking around under your successor’s feet. A Jazz Fest in the future would not be out of the question.

CCJN: And when you have situated yourself elsewhere and you look at the calendar and see August 29th, you’ll probably say a prayer of thanks that you are not in New Orleans. (laughing)

Silver: (agreeing) It will resonate. (reflects) That is one of the things about New Orleans. It gets into your calendar.You learn that you need to do Mardi Gras before you do Purim. Ideally, the same costume is going to work. I’m sure those kinds of things will remain in my mental calendar long after I’ve gone.

CCJN: You’ve accomplished a lot during the past six years – some good times and some sad times. We’re thinking about the various weddings you conducted as well as funerals, as examples. And then, the whole COVID experience….

Silver: It’s a good number of chapters in the memoirs, yes. (pausing). I think we can say that I very much value the cooperative projects I’ve dealt with colleagues.

CCJN: Yes. We have been very impressed with the teaching opportunities and classes you’ve created with others. Thank you for all you’ve accomplished. In theatre parlance, we would say “Break legs!” At the opera, we might say “Toi, toi toi!” In Judaism, we say “Chazak! Chazak! V’nitchazek!”