NEW YORK (JTA) — Isaac Azose knew he had a treasure in his hands — a nearly century-old booklet for Ladino-speaking Jews immigrating to the United States that featured English, Ladino and Yiddish expressions to help them acculturate into their new communities.  “I thought to myself, I’ve got a real find here,” said Azose, the cantor at Congregation Ezra Bessaroth in Seattle, Wash., whose family came from Turkey.

So he became one of many people in Seattle to share a Ladino artifact with Devin Naar, an assistant professor in Jewish studies at the University of Washington who is trying to uncover, collect, preserve and digitize the rich heritage of Sephardi Jews.

While small collections of Ladino books and documents can be found at the Library of Congress, the American Sephardi Federation and Yeshiva University, Naar says his project, the Seattle Sephardic Treasures, is the first community-based initiative to gather Ladino source materials in one place.

“More than 10,000 Yiddish books are readily accessible and digitized through the Yiddish Book Center in Amherst, Mass., but no equivalent exists for Ladino and virtually no original Ladino books can be accessed online,” said Naar, whose effort is part of the larger Sephardic Studies Initiative of the University of Washington’s Stroum Jewish Studies Program.

Ladino, also known as Judeo-Spanish, was the language of Sephardi Jews whose ancestors were expelled from Spain in 1492 and then settled throughout the Mediterranean basin of the Ottoman Empire.

It’s Ashkenazi counterpart, Yiddish, continues to survive through Yiddish-speaking haredi Orthodox communities and some secular advocates of the language. Ladino, however, has faced a steep decline in the past century. While Yiddish has more than 3 million speakers worldwide, UNESCO estimates that fewer than 150,000 people still speak Ladino.

Gloria Ascher, co-director of Judaic Studies at Tufts University, offers several reasons for the language’s precipitous dropoff: 90 percent of Ladino speakers, particularly in places such as Bulgaria and Greece, were murdered during the Holocaust; with the rise of Zionism, Hebrew is emphasized as the central Jewish language; and Ladino-speaking immigrant parents encourage their children to speak the native language of their new countries, such as English.

After New York and Los Angeles, Seattle has the third largest Sephardi community in the United States. According to a 2000 study by the Jewish Federation of Seattle, there are 2,700 Sephardi households in the community’s total 22,490 Jewish households.

Naar started collecting materials at Ezra Bessaroth, a Sephardi synagogue, at the annual Purim bazaar in March. He already has gathered dozens of documents, including a rare Ladino textbook published in Salonika, Greece, in 1929. He even found a set of letters from the 1930s written by a 9-year old girl from the Island of Rhodes to her family members in Seattle. 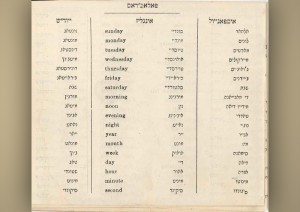 A document from "A Guide For Sephardic Immigrants in America," which was published in New York in 1916, showing words in English and their translation in Yiddish and Ladino. (Courtesy of Isaac Azose)

“She was able to correspond her way and her family’s way off the island of Rhodes to evade Nazi persecution and to find safety in the U.S,” Naar said. “The entire story is preserved in the set of letters. It’s really an amazing story.”

The value of the objects should not be underestimated, says Noam Pianko, chair of the Stroum Jewish Studies Program.

Many of the documents, he says, have been buried in basements or closets and breathe an authenticity that can never be captured in academic works.

“I want to make the materials available in their original form so you can see the handwriting, the coffee stains and the lived lives of the owners,” Naar said.

Lynne Winters, director of the American Sephardi Federation, says it is remarkable that Naar has gained so many original documents. “When you can touch something that someone’s hands touched however many years ago, whether it is 20, 25 or 100 years ago, there’s something unique about that than just seeing it in a book,” she said. “You are touching history and making a physical connection with someone who’s passed.” 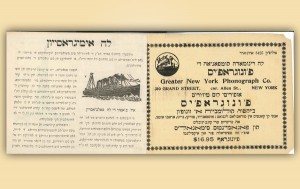 A chapter from "A Guide For Sephardic Immigrants in America," which was published in New York in 1916, written in Ladino.(Courtesy of Isaac Azose)

Naar hopes to use his effort as a pilot program to be replicated with Sephardi communities elsewhere in the United States.

“Ladino source materials, although in smaller amounts to begin with, are not easily accessible and there’s been no project until now to make Ladino materials widely accessible over the Internet,” he said.

Unlike Yiddish documents, which have been catalogued through the YIVO Institute for Jewish Research in New York and other archives, Ladino documents have no such home.

“I have a few Ladino books and they are in pretty rough condition, and there are not going to be anymore coming out,” said Randall Belinfante, librarian and archivist at the National Sephardic Library. “People are writing about Ladino culture, but they are not writing Ladino materials.”

Lyudmila Sholokhova, the head librarian at the YIVO Institute, says there is no clear estimate of how many Ladino books still exist. However, there are an estimated 600 Ladino works at Yeshiva University, 200 more at YIVO, 200 at the Library of Congress and about 170 at the National Sephardic Library.

There is a level of interest in preserving the language. Ladino Komunita, an online Ladino forum started by Rachel Bortnick in 1999, tries to unite the Ladino-speaking community. The forum now has 1,400 people from more than 42 countries.

“The language was the rope that tied our culture together,” Sholokhova said. “Without the language and without the communities that spoke the language, all we can do is to pick up the pieces and rescue them from oblivion — the food, the sayings, the customs related to our Jewishness in the Sephardic form.”

Azose is hoping that Naar’s effort will have an impact not just on scholars but on today’s descendants of Ladino speakers.

“I think the younger generation will take more of an interest than the current generation,” he said. “They will want to know more about their history and where they came from, and their parents may not be able to answer those questions for them — but this will.”

Israel closes its borders, including for citizens and immigrants, in effort to curb COVID-19

(JTA) — Even as Israel has emerged as the world’s fastest-vaccinating country, its pace of new COVID-19 cases has set records as well.

Now, in a desperate effort to bring the outbreak under control, the country is taking the unprecedented