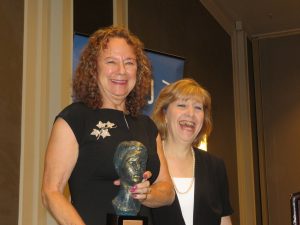 The award is chosen by an NCJW committee and presented to a member of the Greater New Orleans community who embodies the commitment to social activism and political engagement promoted by Solomon, the founder of the NCJW. On only four previous occasions, it has been presented to a married couple.

The Hannah G. Solomon Award itself is a bust of the galvanizing figure’s head and, with the exception of 1980 has been presented every year since 1966.

Event chair Kathy Shepard introduced Hess saying she “chooses projects that she can ‘get in on the ground floor’ and, therefore, have a great impact.” Shepard cited Hess’ involvement with several projects during the post-Katrina period in which she helped to rebuild or bring stability back to the flood-ravaged city.

She added that Hess was also involved with the local NCJW section in many capacities working on past events and projects and had additionally served on boards for the Jewish Endowment Foundation, Tulane Hillel, Temple Sinai and the Longue Vue Foundation among many others. Shepard also acknowledged Hess’ establishing the first Victory Ball for the National World War II Museum. She was a recent recipient of the museum’s “Spirit Award” this past spring.

Hess was also cited by Shepard for her dedication to her own family and for her work in adopting elderly shelter animals from the SPCA, knowing that these animals are among the most difficult to place in homes.

Three NCJW leaders – Ina Davis, Vivian Cahn and Susan Kier – added their own personal insights that Shepard quoted, each crediting Hess with various aspects of her being a dedicated leader and tireless volunteer.

Prior to receiving the award and speaking to the gathering, Hess was given a proclamation sponsored by City Councilman Joe Giarusso III and signed by the entire New Orleans City Council recognizing her achievements in being named the 2018 Hannah G. Solomon Award.

After Shepard had presented the award, Hess laughingly complained that Shepard had had already said everything about her. Soldiering forward, she did produce a prepared speech.

“As you can see,” she began her talk, “I am dripping with jewelry today,” pointing to a large diamond-encrusted pin she wore on her right shoulder. The reason she explained was that the piece had been presented to her by Edith Stern, whom she identified as her “grandmother-in-law”  on the occasion of Stern’s 80th birthday.

“Edith was my friend and my mentor and also she was the 1971 recipient of the Hannah G. Solomon Award,” Hess explained. “She was a great judge of character and she taught me a lot including how to be comfortable and empathize with all kinds of people.”

Speaking before the crowded NCJW luncheon at the Marriott Hotel is Susan Hess. (Photo by Alan Smason)

Hess also pointed out a jeweled representation of a four-leaf clover, which Hess stated belonged to her late mother was her mother’s signature. “My mother valiantly struggled to teach me to be a lady at all times,” Hess continued. “The combination of these two important influences probably put me here today before you. I suppose you could say I am the living legacy of these two terrific women.”

After more than 50 years as a member of NCJW, Hess acknowledged how important the organization had been in shaping her ideologically and prepared her for all of the work she has done thus far.

From “Hannah G.’s” book “The Fabric of My Life,” Hess read a quote: “‘The most enduring ratification results not so much the actual attainment of the goal as from the work that educates us along the road to that goal.'”

Hess then added,” and that is exactly what this organization has done for me.”

The moral and ethical values derived from the Jewish religion and expressed through the influence of the NCJW help to form the lives of its members, Hess said. “We are provided with roots and wings,” she continued. “The roots are our identity, which is the collective memory of our shared past. The wings give us courage to live lives of purpose and meaning, being fully present in the moment and also being a conduit for the future.”

Hess characterized her involvement with NCJW as pushing her towards a sense of destiny and community that unveiled in her the best of her potential. “Without NCJW my life would have been a meaningless march towards my own mortality,” she said. “I wanted more and I got it.”

Hess reminisced about many of the projects with which she has been associated. These included her first involvement with the Community Service Center, a program that helped recently-released prisoners find constructive jobs in the workforce, her work helping to open the Lousiana Nature Center and her involvement with the University of New Orleans Foundation, then known as LSUNO, where she helped coordinate the visit of Pope John Paul II.

Hess also added her fulfillment as a volunteer with the SPCA and City Park, both of which benefited largely from her work in their recovery efforts from the effects of Hurricane Katrina. “Katrina tested all of us in ways we could not have predicted, both personally and with projects we served,” she noted.

Towards the end of her speech, Hess recalled that Solomon wrote more than 2,000 personal letters to community leaders across the nation in setting up the various sections of the NCJW. “Think of her satisfaction in setting up a whole volunteer network that had never existed before,” Hess said. “Each of us can be just as purposeful.”

She pointed towards challenges in the future such as the implementation of artificial intelligence that may eliminate scores of jobs, even professional positions, through the ability of machines to connect to each other and group learn, for example. “Most workers will not be able to keep up and will ultimately become useless and irrelevant in the workplace,” she predicted.

Another startling advance  threatening mankind, or at least the status of man, might be the creation of a class of humans that can afford to implant devices which would connect them directly to “the Cloud” through a “neural net.”

“This is likely to create a major class divide between the haves and the have nots,” Hess warned.

Also on her list of potential problems for the future is climate change, which could impact large sections of the world’s population, she added.

Hess challenged her fellow NCJW members to keep vigilant on these and other potential problems for the future.

Hess thanked the members of the event and selection committee. “I’m very proud to accept the Hannah G. Solomon Award and to take my place among so many other fabulous recipients,” she concluded. “Of all the recognitions that I have received over the years, this is the one that has truly touched my heart. However, awards are never earned in a vaccum. There’s always help from many others. You, NCJW members are many others and I thank you.”

(JTA) — Mike Bloomberg will finally go toe to toe on a debate stage with his fellow Democratic presidential hopefuls.

The billionaire businessman and former New York mayor has qualified for Wednesday’s debate in Las Vegas days ahead of the...
Continue Reading ⇒