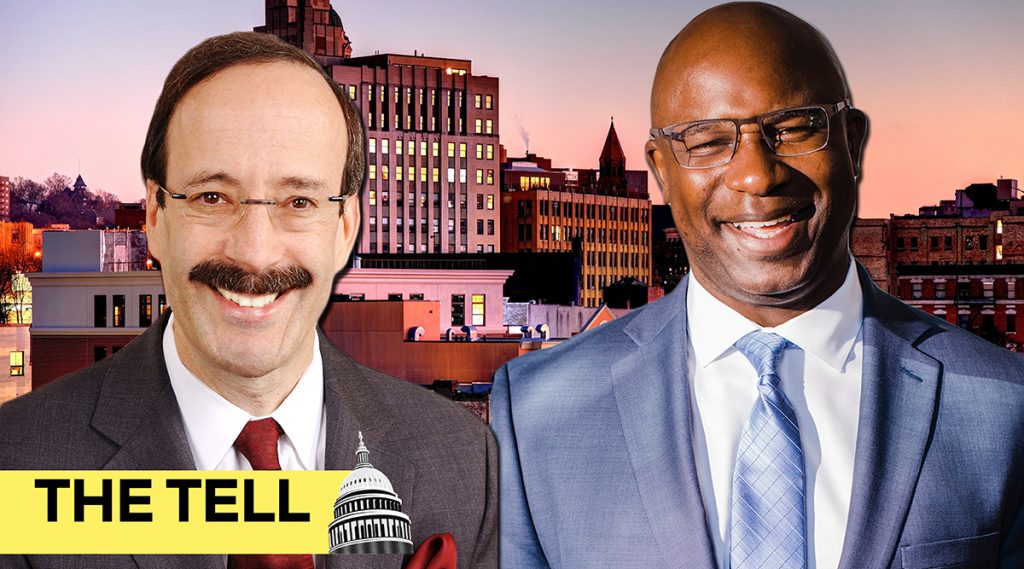 WASHINGTON (JTA) — It would seem that most of us agree, left and right, that Black lives matter and that policing reform is long overdue. But there are fissures and fractures under the surface, arguments over the solutions and the candidates most capable of leading us to a better day.

Squeezed in the middle: the political center. At a time of uncertainty and turmoil, the center is battling — flailing even — to hold its place.

Here are some snapshots from that battle.

Eliot Engel’s Bronx campaign is burning
The Democratic primary race between Rep. Eliot Engel, the Jewish 16-term incumbent in New York’s 16th District, and Jamaal Bowman, an African-American educator who is new to politics, is emblematic of the establishment vs. insurgency battle that has preoccupied the party since the 2016 primaries.

The lists of endorsements offer a pretty clear picture of the story: Engel has the likes of Hillary Clinton, Chuck Schumer and Jim Clyburn, while Bowman has Bernie Sanders, Alexandria Ocasio-Cortez and Elizabeth Warren.

As the dust begins to settle with the election less than a week away, on June 23, Engel appears to be in big trouble following a series of mishaps. This week, a poll by the Bowman campaign showed the neophyte candidate leading Engel 41-31%, with 27% undecided.  The web based poll canvassed 525 voters and had a margin of error of 5.1 points. It was conducted by Data for Progress, which backs progressive issues. On Twitter, Engel’s campaign said their internal polling had their candidate 8 points over Bowman.

The campaign has become testy in ways that underscore the left vs. establishment narrative: Bowman has weaponized Engel’s home in Maryland, and the congressman staying there during much of the coronavirus pandemic. Engel, the chairman of the Foreign Affairs Committee, has said that as a leader of the caucus, he needed to be near the Capitol for the crises that arise nonstop.

The Democratic Majority for Israel is running ads in the district, which includes the Bronx and parts of suburban Westchester County, showing that Bowman has faced multiple actions for not paying taxes. Bowman, who as a result of the ads paid $2,000 in outstanding levies, responded by calling the attack “ugly.”

“Frankly, we need more members of Congress who know what it’s like to be in debt and struggle to pay bills, especially at a time like this,” Bowman said.

Then there’s the Israel issue (of interest to the folks who read this newsletter, but from what I hear isn’t resonating in the district): Engel has been a pro-Israel stalwart for decades, a regular at AIPAC and, until recently, at organizations to its right as well, including the Zionist Organization of America and Christians United for Israel. Bowman has said that he would consider conditioning aid to Israel on its behavior, but he has also stressed that Israel has a right to security.

All this has happened at a time of national tension over police brutality and racism, and it would be easy to cast Bowman vs. Engel as a sign of the times: an anti-establishment young African-American taking on a denizen of the aging white establishment. But it’s more complicated.

Engel has garnered the endorsements of much of the Congressional Black Caucus, including senior leaders who are now seeking police reforms, among them Clyburn of South Carolina, Hakeem Jeffries of New York and Maxine Waters of California. He also has the endorsements of figures who have been at the forefront of efforts to combat Trump, including Randi Weingarten, the president of the American Federation of Teachers.

In their endorsements, the black lawmakers emphasize Engel’s role in helping to pass civil rights legislation. But this line in Waters’ statement sticks out: “We absolutely need to return his experience and deep commitment to Congress — particularly now as we fight to take back the White House.”
Speaker Nancy Pelosi, who also has endorsed Engel, sees 2018 as a lesson in how to win back the White House: Maintain the center.

Sanders in his endorsement said Bowman would spearhead change for the working class.

“Jamaal understands that low-income families are locked out of opportunity and a decent life due to a system that is rigged to benefit the wealthy,” he said. “In Congress he will lead the fight for investing in our public schools, ending mass incarceration, and addressing the housing crisis.”

The Jewish establishment disagrees on police reform
The Black-Jewish Congressional Caucus held a public meeting last week to address the current moment. It was mostly a friendly affair, but if you stayed the entire 90 minutes, a striking difference in tone emerged over the degree to which policing was responsible for the turmoil — and not between African-Americans and Jews, or even between tyros and establishment figures, but among avatars of the establishment.

Jason Isaacson, the chief policy and political officer of the American Jewish Committee, which convened the caucus last year, was plainly in the “bad apples” camp, which maintains that the entire police establishment should not be indicted by the actions of a few. He decried a “minority” that “stains the honor of the many men and women in blue who serve our country” and described police institutions as “essential.”

Isaacson said the AJC would not support the “whole defunding” of the police.

Rep. Debbie Wasserman Schultz, D-FL., a co-chairwoman of the caucus and a former chairwoman of the Democratic Party, depicted a policing problem that runs much deeper than a minority of wrongdoers.
“The systematic brutality that has been part of America’s justice system for hundreds of years must be eliminated,” she said.

The tonal difference is not surprising: The AJC operates in a nonpartisan reality, reconciling donors and activists belonging to both parties. Wasserman Schultz splits her time between Congress’ Democratic caucus and South Florida, with its minority-heavy districts.

Rep. Brenda Lawrence, D-MI., another co-chairwoman of the caucus, started the session by saying “This is the time for the Jewish community to stand with Black America, the times have found us.”
How one stands with Black America is not yet clear to the Jewish establishment. Wasserman Schultz and the AJC need to chat.

There’s disagreement on annexation, too
Another emerging difference between the Democratic establishment, including its Jewish leaders, and outside Jewish groups is the stated plans of Israeli Prime Minister Benjamin Netanyahu to annex parts of the West Bank.

Four leading Democrats, including two AIPAC stalwarts, Ted Deutch of Florida and Brad Schneider of Illinois, are seeking co-signers on a letter to Israel’s leaders that would warn against annexation while reaffirming the U.S.-Israel relationship.

The idea was to avoid the divisiveness of a Senate letter that warned of repercussions to the U.S.-Israel relationship. But the American Israel Public Affairs Committee has come out emphatically against the letter, saying it violates traditions of not openly criticizing Israel and does not sufficiently fault the Palestinians.

A two-state outcome has been a sine qua non of Democratic support for Israel for two decades. AIPAC’s posture does not give its best friends in the Democratic caucus much room to maneuver. Schneider and Deutch and AIPAC need to chat.

It’s not just the Democrats who are fighting
The boardwalks may be shuttered, but the Republican establishment, and the Jewish Republicans who are close to it, are busy playing whac-a-mole. Just weeks after the Republican Jewish Coalition joined the party leadership in keeping white supremacist-aligned Rep. Steve King of Iowa from winning a primary, they have to contend with the rise of the right in primaries in Virginia and Georgia.

Rep. Denver Riggleman, a first-termer from Virginia who was emerging as a pro-Israel leader — last year he sought a review of federal funding for Georgetown University because of allegations of anti-Israel bias — lost a primary largely because he would not apologize for officiating at a same-sex wedding.

Marjorie Taylor Greene, meanwhile, finished first by a considerable margin in a congressional district in northwest Georgia. She has dabbled in anti-Semitic conspiracy theory, in addition to saying Islam promotes pedophilia and that Muslims should not serve in government, and calling Black people “slaves to the Democratic Party.”

Greene fell short of the 50% needed to avoid a runoff and the party’s leadership is already speaking out against her. The RJC fundraised for Riggleman and, I hear, may soon pronounce on Greene.

In Other News
Lightning Bolton: Trump’s former national security adviser is about to release a book with the thesis that the president runs his foreign policy as a reelection shop, seeking quid pro quos not only from Ukraine but also China. Bolton may have made himself radioactive: Trump is indicating he may prosecute him for the book, and Democrats are furious that he saved the revelations for a $2 million payday and not for testimony during the impeachment.
Bolton once had more friends: In the early 1990s, he spearheaded the effort to have the United Nations trash its “Zionism is Racism” resolution. So in 2006, Jewish organizations came out with rare on-the-record endorsements of Bolton as ambassador to the United Nations. It’ll be interesting if any of the same players speak up now.
The Bolton situation has also precipitated the strangest bedfellows moment in a 2020 packed with them: On Thursday, Trump retweeted a slam on Bolton by Max Blumenthal, who has made a career of reviling U.S. foreign policy, including under Trump. He is the son of Sid Blumenthal, Hillary Clinton’s most dogged attack dog, but he also rejects Israel’s existence as a Jewish state. So Trump wasn’t exactly retweeting a friend.

Vindman vindictiveness: Lt. Col. Alexander Vindman, the Jewish officer who testified during the impeachment trial, may not be promoted to colonel because Trump is still furious with him, The Washington Post reports.
China angina: Secretary of State Mike Pompeo uses an AJC forum to give Israel grief over its commercial ties with China.

ICC I see you: The Trump administration warned the International Criminal Court that it will face sanctions for prosecuting Americans or Israelis. Very much on board is Rep. Elaine Luria of Virginia, a Jewish Democrat and a Navy veteran. “This is yet another example of the international community’s disproportional attacks on Israel, and I look forward to working with the Administration to end these discriminatory campaigns,” she said.

WORTH A LOOK
That “Zionism is Racism” resolution that Bolton helped nix? It plays a role in a 1975 Supreme Court decision that the Trump administration apparently will cite in its bid to have social media giants like Twitter be more compliant with what Trump sees as ending bias. It’s a little circuitous, but Garrett Epps, a professor of constitutional law at the University of Baltimore, explains it at The Atlantic.

stop yelling at me about my imaginary nonwhite children

A House Judiciary Committee debate on policing and Black lives took an odd turn on Wednesday when Rep. Cedric Richmond, D-LA., was explaining why he dreads an encounter between his son and police.

Matthew Gaetz of Florida interjected to say that Republicans have Black children, too — which, OK — but that devolved into Gaetz protesting what he took as Richmond’s attack on Gaetz’s love for his own Black children. Except Gaetz is white, unmarried and childless.

Matthew Gertz, a Jewish writer for the liberal Media Matters watchdog who is often mistaken on Twitter for Gaetz, had enough.

(JTA) — One week after Ben & Jerry’s announced that it would stop selling ice cream in the “Occupied Palestinian Territory,” the company’s board chair for the first time publicly rejected the suggestion that the move was