On a cloudy and rain-threatened afternoon, Valerie Sassyfras is dancing behind a multi-colored scrim at Melba’s, a St. Roch neighborhood daiquiris and fast food eatery. Trance-like, she is moving to a track of her own previously-recorded vocals, reaching out to a small audience eating fried food through her tightly-closed eyes. Above all else, she is joyous and full of song. 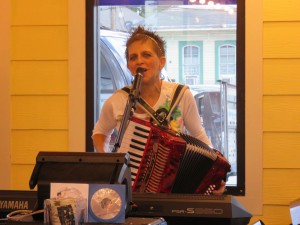 Musical wonder Valerie Sassyfras playing accordion and singing in three-part harmony with herself.

Sassyfras has few worries as she alternately plays the keyboard, accordion, washboard, mandolin and foot tambourine while harmonizing with her laid down vocal tracks.

She is singing and playing the musical score of her life and, while the audience members answer each song with polite applause, she is transfixed in both her music and song and transported to a state of nirvana.

Born a Reform Jew and reared along the formerly-dense Jewish enclave of Louisiana Avenue Parkway as a youth, Sassyfras is a unique product of a decades-long journey born of happiness and pain, which has led to her musical rebirth.

Married twice and now widowed, she has had to reinvent herself following the passing a year ago of her musical mentor and husband of 30 years, Johnny Donald.

Sassyfras waxes romantically about Donald and his profound influence upon her that took her from a classically-trained pianist to a Cajun, Zydeco, country and rhythm and blues performer.

Divorced from her first husband after seven years of Jewish marriage, Sassyfras found herself at an emotional crossroads, working at a shoe store where Donald was the manager. “He fell in love with me right away,” she recalls. “But I didn’t know that until the end of the marriage.”

A divorcé as well, Donald, who hailed from Ft. Smith, Arkansas, eventually made a proposal of marriage, which she accepted.

An opening for a Cajun band at Mulate’s Restaurant was the first opportunity for the couple. While neither had a lengthy association with that particular genre of music, Sassyfras was familiar with it largely through her former Catholic mother, who had converted to Judaism when she married and began her family.

They needed to do their homework. “We started buying all of the recordings and we went to the library and started listening to all of the old recordings,” Sassyfras remembers. The two learned about the music of Amédé Ardoin, a black Creole and Cajun fiddle player and high-pitched singer, who died as a result of a racially-motivated beating. They rehearsed the music of others like newcomer Zachary Richard and D.L. Menard, whose “The Back Door” was a Cajun standard.

The gig at Mulate’s led to an appearance at the Kenner French Festival in the late 1980s as well as at other restaurant job sites like Masson’s Beach House. “Johnny named the band Sassyfras,” she says. “He said I was sassy; it just fit perfect. He was brilliant that way – he’d come up with things out of thin air.” 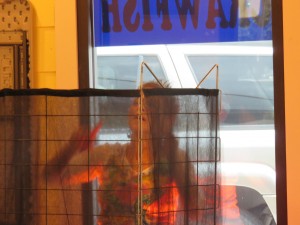 Valerie Sassyfras dances and sings original songs from behind a scrim. (Photo by Alan Smason)

In an instant she became Valerie Sassyfras. At her husband’s insistence, she purchased the first of her accordions and taught herself to play.

A talented musician and a former owner of several small bars in Mississippi during his first marriage, Donald concentrated his considerable experience in hiring bands and the business of music into turning the group Sassyfras into a quality act. His wife was at the forefront.

Then, they moved to Music City U.S.A., Nashville, Tennessee. For a while, they opened and ran a bar not far from the famous Ryman Auditorium, the former home of the Grand Ole Opry. Drawn to the watering hole for Donald’s gumbo and other treats during late nights were many famous personalities including Tanya Tucker and Gatemouth Brown. The group Sassyfras changed its musical focus from Cajun to country. “Nobody was interested in Cajun,” she notes.

Because he knew the music game very well, Donald also became a well-known sound designer for music shows and local musicians began to trust his instincts for equipment. Following the sale of their property in Tennessee, the musical couple moved to Hastings, Florida and opened a music equipment store and built a recording studio there.

Sassyfras concentrated on her music, while her jack-of-all-trades husband ran the music store and recorded local musicians. Then, tragedy struck in the form of a bicycling accident in which Donald was struck by a passing vehicle.

The accident crippled him and forced him down a seven-year-long road of corrective surgeries. As things got worse, the two elected to move back to a New Orleans suburb in 2011. No longer able to walk and in excruciating pain, he died a year ago in June, leaving behind his heartbroken wife.

Before he died and knowing she needed to be able to support herself, her husband had encouraged her to take a job playing during the day at the nearby Picadilly’s Cafeteria. Performing with a variety of instruments, Sassyfras began to play instrumental music there with the blessings of the management about three years ago.

She built up a solid base of fans including youngsters, who were mesmerized by her abilities and musical stylings of Cajun, Zydeco and popular tunes. Yet, she did not yet have the courage to begin to sing her own original tunes until after he died.

“I didn’t do clubs until Johnny passed away,” she admits. “My first club gig was in October at a Mid-City club.” Sassyfras began to sing songs like “Youth Is Wasted on the Young,” the risqué “Girls Night Out” in which she craves booze and men and  “Roller Coaster” in which she accuses a lover of cheating. Coupled with her repertoire of Cajun and Zydeo tunes, she became a sensation wherever she played.

One of the most plaintive of her songs is a ballad titled “On the Outside” in which she bemoans the loss of her real-life husband. “The originals, it’s like they’re your children,” she states. “Everything is done right out of my life.”

Suddenly, a whole new world of young adult fans has responded to her unusual vocals and creative playing coupled with her inventive dances.

One of her biggest fans, Sasha Masakowski, is famous herself, the acclaimed jazz vocalist and daughter of renowned jazz guitarist and educator Steve Masakowski. “Valerie is a gift!” she exclaims. “(She’s) A genuinely selfless, charming performer with the ability to command any stage as if it was her living room. The warmth of her spirit and purity of her heart are intoxicating; she is truly a diamond in the rough!”

A lot of the younger Maskowski’s contemporaries have been similarly charmed and impressed by her. Sassyfras performed as an opening act for Masakowski on one occasion and she considers her a good friend and “the most wonderful person.” As a direct result of this exposure, Valerie Sassyfras is now an instantly recognizable figure about town, particularly in the under-30 set.

“I think what myself and other musicians are drawn to is her confidence and originality, combined with her remarkable perseverance,” Masakowski continues. “We can all learn to be more comfortable in our skin, to dance a little more, to learn to abandon any fear of putting ourselves in the spotlight no matter how vulnerable we might be.”

Aside from an occasional appearance at nearby Melba’s, Sassyfras can be seen performing from time to time at the Allways Lounge and Hi Ho Lounge across the street from one another on St. Claude Avenue, in Lakeview at the Homedale Inn and at Casa Gasa on Freret Street.

Her gigs have increased enough for her to have purchased a new synthesizer on which she samples her own voice and adds drums and percussion to her live performances.

“Being a mult-instrumentalist one-woman act complete with choreography and a repertoire of all original material is not easy task,” confides Masakowski. “But Valerie does it with the charm, style and youthful spirit that is simply…Sassyfras.”

Valerie Sassyfras can be seen performing and singing Mondays, Wednesdays and Fridays at Morning Call in City Park from 10:00 a.m. to 7:00 p.m. .

Grafton Thomas, now 38, has already been