When an old synagogue downsizes, what do you do with all its stuff?

ERIE, PA. (JTA) — There was some debate about putting the old synagogue building up for sale and moving to a new, smaller building, but not much. When a major pipe burst at Temple Anshe Hesed in 2012, the cost of repairing the nearly century-old building convinced the small but resilient congregation that it was time to move.

But as in any such move, the task was daunting: How do you pack a congregation’s history and its thousands of objects into a building one-third the size of the old one? 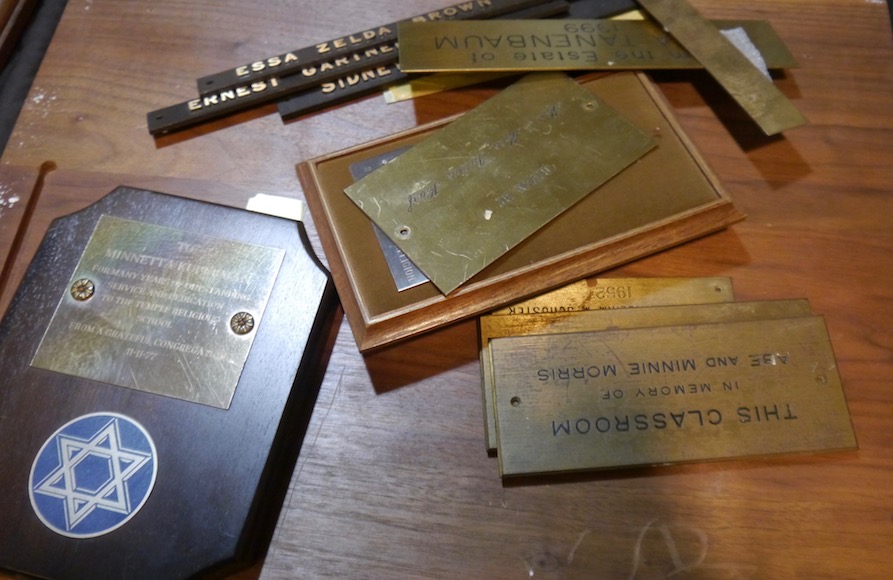 Temple Anshe Hesed in Erie, Pa., formed a Judaica Committee to make decisions about what to keep as it moved to a smaller synagogue. (Alanna Cooper)

Last Friday, members of the Reform temple here gathered in their building one last time. At an event advertised as a “de-consecration,” some 60 men and women, along with a few children, joined under the sanctuary’s dramatic dome to say goodbye to the structure that has served as the congregation’s spiritual home since 1929.

During the service led by Rabbi Susan Stone, the group sang together, paused for a few moments to remember Anshe Hesed members who have passed and to recite a poem, “We recall at this time those joyous events we celebrated within these walls …”

The reflective, serious atmosphere was mixed with a celebratory tone as members removed the five Torah scrolls from the ark and carried them out of the building, embarking on a fresh chapter in their congregation’s history. Boarding two old-fashioned trolley buses rented for the occasion, the group traveled together to its new home located five miles east on Old Zuck Road in Millcreek Township.

I took part in the event as part of my research into what congregations do with their belongings when they merge, shut down or downsize.

Like other Rust Belt cities, Erie’s population has been on a steady decline for decades. It peaked in 1960 with 138,440 residents, and today numbers just under 100,000.

The city’s Jewish population has followed the same pattern. Erie was once home to 3,000 Jews and three synagogues, one for each of the major denominations. By 2007 the Jewish population there had decreased to 700; by 2013 it was at 480. 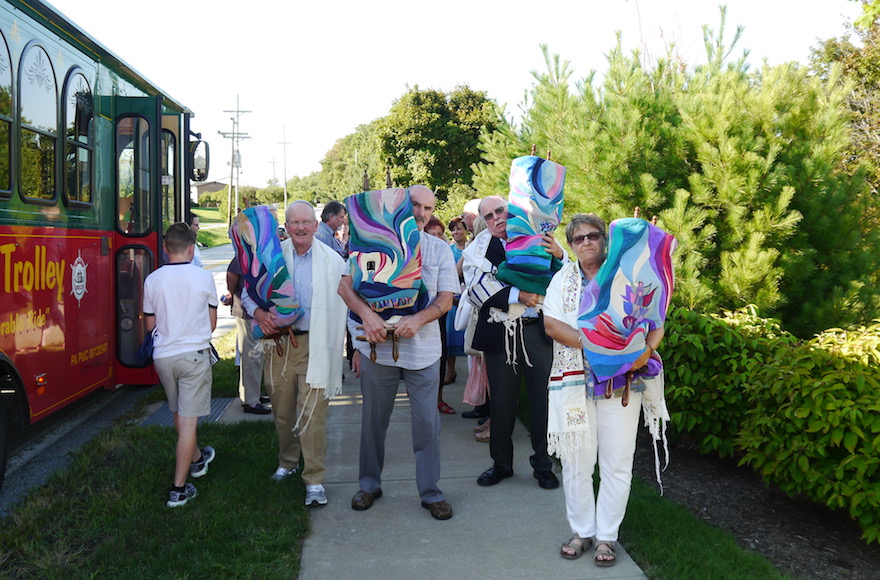 Temple Anshe Hesed congregants carry the Torah scrolls from their old building during a “de-consecration” event on Aug. 31, 2018. (Alanna Cooper)

Ohel Jacob, the Orthodox synagogue is long gone, having shut its doors in the 1970s. The Conservative synagogue, Brith Sholom, is still in operation, although the congregation sold its building in 2013 and meets in the sanctuary they rent back from the new owners.

Anshe Hesed still has enough members to sustain weekly and holiday services, and a bequest to pay for the new building. Lisa Chinsky, a former temple president who became bat mitzvah in the building and was married there, likened the move to becoming an empty-nester.

“The children have moved out and now their rooms are sitting empty,” she said, referring to the building’s many religious school classrooms..

The cost and hardship of maintaining the large building had become unwieldy for the aging Anshe Hesed congregation. In addition, the neighborhood has changed. Congregants explained their feeling of unease in the area, pointing to hypodermic needles found around the building, and damage vandals had done to their sukkah.

Still the decision to move was not simple. A few members objected, some threatening to leave. One anonymous individual sent a letter to the entire membership list, describing their longtime building as “alive with the breath of a living congregation.”

The writer explained, “When I touch the walls I can feel it breathe,” and now “I can also feel that breath being taken away.” Rather than celebrating the new building, the letter called for mourning the loss of the old one.

Even the less sentimental, who insist that the life of the congregation is “about the people” rather than the building they inhabit, understood the challenge of what to do with objects accumulated over nearly a century. The objects include large ritual items such as the ark, which holds the Torah scrolls, a Holocaust memorial display and the stained-glass windows — not to mention books, paintings, tapestries, sculptures, memorabilia and over 30 Hanukkah menorahs that had been donated or acquired over the years.

In preparation for the move, a Judaica Committee and an Arts and Archives Committee were formed to make decisions about what to keep, what to sell or give away, and what to discard. The group agreed to digitize 90,000 pages of documents that dated back to the temple’s founding in 1862. The new home also included an archive room where every single dedicatory plaque is stored, as stipulated by one major donor.

The heavy wooden carved doors – which graced the front of the building the congregation occupied before it moved in 1929, and which were displayed on a wall of the social hall in the 1929 building – have also been mounted in the archive room. The bulky bronze ark, which does not fit the aesthetic of the new space, will be reconfigured as a sculpture that will sit in the outdoor patio area.

The most difficult dilemma involved the 12 stained-glass windows situated around the drum of the dome, and the tripartite arched window above the balcony at the back of the sanctuary. Their vibrant colors and ephemeral quality served as a defining feature of the building’s grand prayer space, which seats 350. One elderly member said that some even regarded the windows as “embodying the soul of the congregation.”

Moving them, however, would be costly and complicated. Walter Harf, 89, who grew up in the temple, estimated the cost for removing each window at $2,000, not including the cost of patching up the holes left behind or mounting them in the new, smaller sanctuary.

Some members – devoted to remembering the congregation’s long and rich history, as well as to a contemporary design that reflects current sensibilities – devised a creative solution. Only the middle panel of each window was taken out and patched up with a clear window, leaving behind the lower stained-glass panel and the arched one at the top. All 12 middle panels were refurbished, and each one placed into a wood case that is backlit with electric bulbs, allowing the colors to glow even at night. Together, the 12 of them line the back of the new social hall in a subtle but aesthetically pleasing statement about Anshe Hesed’s enduring connection to its past.

The window at the back of the sanctuary was fully removed. Artist Bonnie Cohen will crush the glass and recycle the pieces, using them to create a colorful custom-made ark for the new sanctuary, which seats 70. Cohen devised this solution when working with the Conservative synagogue Beth El in Akron, Ohio, which went through a similar process of downsizing and moving in 2012.

Anshe Hesed congregants also took with them the cornerstone of their 1929 building. When it was removed as part of the de-consecration ceremony, an old iron box was found tucked inside. Someone handed it to Lyman Cohen, 94,the oldest member of the group.

“Were you here then, when the box was sealed up?” he was asked.

Cohen chuckled, responding that he cannot remember that far back. Riding in the procession to the new building, he held the box on his lap like a treasure.

After a religious service in the new sanctuary, people gathered around to open the box. The documents inside included letters of congratulations on the congregation’s new building, as well as a list of donors who supported its construction. Almost a century has passed, but the sentiments around constructing a new congregational home, moving in, and the hopes for a financially stable and vibrant community life remain the same.

Leaving, I spoke with a former temple president, Jackie Breakstone, who ushered the congregation through much of the de-accessioning. She has not felt emotional during the two-year process, Breakstone said, “but when we left the old building and I turned off the lights, I choked up.”

Not for long, though. Breakstone will be back there in the coming weeks to finish going through the sundry items that hold no sentimental value. She is hoping to find organizations to take the stuff.

“Whatever we don’t manage to donate,” she said, “we’ll have to pay to haul.”

(Alanna E. Cooper is director of Jewish Lifelong Learning at Case Western Reserve University and an adjunct assistant professor in its Department of Anthropology.)