Was there ever a more improbable meeting of two Jewish culinary celebrities than that which took place last week in New Orleans? Washington, D.C. area resident Michael Twitty, an African-American Jew and authority on African and other ethnic food, came to the Big Easy to connect to his cultural roots specifically through Southern and Jewish food.

Standing toe to toe with Mildred Covert, the erstwhile actress and famous kosher cookbooks writer, Twitty explored a part of Jewish New Orleans he had only read about previously. Covert, a deliberate, white-haired octogenarian looked pale and thin as a rail compared to the swarthy and portly Twitty. A jovial first-time guest in New Orleans, Twitty had already visited with local creole legend Leah Chase, but was nonetheless already familiar with the several cookbooks Covert had written with Sylvia Gerson of blessed memory, among them “The Kosher Cajun Cookbook,” “The Kosher Creole Cookbook” and “The Kosher Southern Style Cookbook.” Covert met Twitty downtown at his hotel as he set about for the next several hours investigating the old Jewish section in present-day Central City along Carondelet Street and the former Dryades Street corridor.  The pair journeyed first to the former site of Congregation Beth Israel (now the New Home Full Gospel Church) afforded Twitty and his ever-present photographer companion an opportunity to be conducted by Covert into what was at one time the largest Orthodox congregation in the south. Twitty was regaled with tales of the good old days when he was able to meet with Pastor Willie Robinson, who helped him connect to the African-American culture of present-day New Orleans. Twitty and Covert next met with Rabbi David Polsky, who conducted them into Congregation Anshe Sfard, the only remaining Orleans Parish Orthodox house of worship not associated with Chabad Lubavitch of Louisiana.

Polsky had read of the culinary historian’s story in the May edition of Southern Jewish Life magazine.  The article detailed how Twitty, the great-great-great grandson of Confederate Captain Richard Henry Bellamy, had become infatuated with his own family history through a series of oral histories left behind by an uncle. He had learned he had Jewish relatives living in Alabama and this brought about a desire to learn more of Judaism. Twitty underwent an Orthodox conversion in 2002 and became so immersed in the faith he even taught religious school. As a former resident of New York, Polsky was amazed at the length and breadth of Twitty’s knowledge of yiddishkeitand the pair happily exchanged information about common places they had traveled to and rabbis with whom they were familiar. Twitty was so impressed with the East European style synagogue located on the edge of the Garden District that he left behind his cell phone. Following another trip back to the synagogue to retrieve the missing phone, Covert and Twitty picked up where the other had left off. Twitty was expected in Natchez before the advent of Shabbat. With his schedule growing tight, he decided to stop back at his hotel and pick up his waiting vehicle and yet another photographer. 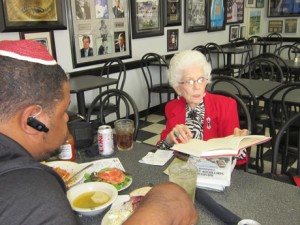 The next jaunt took the contingent to Metairie to the Kosher Cajun Grocery and New York Delicatessen on Severn Street. Twitty was not shy about ordering several orders including matzah ball soup and a corned beef sandwich on rye. Covert took out all of her cookbooks and continued to banter back and forth with Twitty, both agreeing that much of the legacy of kosher cooking was the ability to be adaptive. Following lunch, the company took a quick tour of Shir Chadash Conservative Congregation, conducted by executive director Sandy Lassen. Lassen gave the group a history of the Conservative synagogue and detailed how the former Tikvat Shalom and Chevra Thillim synagogues had merged. A cursory examination of remaining structures along West Esplanade Avenue included riding past the Goldring-Woldenberg Metairie campus of the Jewish Federation of Greater New Orleans and the home of the New Orleans Jewish Day School and the Jewish Community Center’s Metairie site. Before leaving for Natchez, Twitty and Covert also passed the Chabad Center of Metairie and stopped at the new home of Congregation Beth Israel under construction and located next to Gates of Prayer Synagogue. It was there, owing to the lateness of the day, Twitty’s contingent parted ways with Covert, who was so moved of her experience that she composed the first letter to the editor for the CCJN.

(JTA) — Guards protecting a Jewish school in the French city of Marseille overpowered a man wielding a knife whom they suspected intended to stab patrons at a nearby kosher store and bakery.