(JNS.org) — As Israeli actress Gal Gadot’s “Wonder Woman” film heads toward $400 million in earnings after debuting in early June, and numerous big-name musical acts line up to perform in Israel this summer, the influence of the BDS movement’s cultural boycott of the Jewish state appears to be waning.

Gadot, who served in the Israel Defense Forces (IDF), has drawn ire from anti-Israel activists worldwide for her vocal support of Israel. Yet despite BDS campaigns to boycott “Wonder Woman” in Lebanon, Jordan, Tunisia and Algeria due to the “Zionist” actress’s leading role, Gadot’s Marvel comic superhero movie soared to success—earning $103.1 million in North America during its first weekend—and received overwhelmingly positive reviews.

On the musical front, while leading artists routinely receive BDS pressure to cancel their shows in Israel, the number of star-studded acts scheduled to perform in the Jewish state this summer is unprecedented.

“Most artists understand that boycott campaigns in this case are racist and destructive, and will not lead to peace,” Roz Rothstein, CEO of the pro-Israel education organization StandWithUs, told JNS.org.

“Not only is the boycott movement against Israel a failure among performing artists, but 21 [U.S.] states have already passed anti-BDS legislation because it is viewed as discriminatory and harmful,” she added.

In May, the Aerosmith rock band and pop star Justin Bieber both performed at Tel Aviv’s Hayarkon Park, resisting BDS petitions signed by thousands to cancel their concerts in Israel. Adding to their defiance of the boycott movement, the Aerosmith rockers met with Israeli Prime Minister Benjamin Netanyahu at his office in Jerusalem. “You don’t want to miss a thing,” Netanyahu told the band when recommending places to visit in Israel, a reference to the group’s first number-one hit.

“Artists that come to Israel have understood that people are trying to take advantage of them because of hatred and for narrow political needs….[At their performances] they see a young, liberal, open audience…and feel that attempts to make them boycott Israel do not give credit to their intelligence,” Lior Weintraub, vice president of The Israel Project educational organization, told JNS.org. 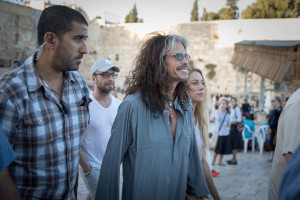 Ahead of Radiohead’s July 19 performance in Tel Aviv, the band publicly clashed with the de facto frontman of the BDS movement, Pink Floyd’s Roger Waters, over the cultural boycott of Israel.

The public spat was instigated when Waters, along with South African Archbishop Desmond Tutu, published an open letter on Israel’s Holocaust Remembrance Day demanding that Radiohead cancel its performance in Israel.

The letter, co-signed by dozens of artists, stated, “By playing in Israel you’ll be playing in a state where, U.N. rapporteurs say, ‘A system of apartheid has been imposed on the Palestinian people’…Please do what artists did in South Africa’s era of oppression: stay away, until apartheid is over.”

Radiohead’s lead singer, Thom Yorke—who rarely speaks with the media—responded furiously to the letter in an interview with Rolling Stone magazine.

Yorke lambasted critics of Radiohead who assumed he and his bandmates were ignorant about the Israeli-Palestinian conflict, and condemned Waters for “throw[ing] the word ‘apartheid’ around.”

“The kind of dialogue that [BDS activists] want to engage in is one that’s black or white. I have a problem with that,” said Yorke, who added it is “really upsetting that artists I respect think we are not capable of making a moral decision ourselves after all these years….There’s an awful lot of people who don’t agree with the BDS movement, including us. I don’t agree with the cultural ban at all.”

Creative Community for Peace co-founder David Renzer told JNS.org, “We are pleased to see the continuation of major international artists performing in Israel, despite the ongoing efforts of the BDS movement and artists such as Roger Waters.”

Renzer, whose organization works “behind the scenes” to provide support to artists performing in Israel, added, “Thankfully, artists are recognizing that the arts are a powerful means to building bridges and aren’t allowing themselves to be manipulated.”