Ed Asner interview: The star of ‘A Man and His Prostate’ speaks

A fixture on TV and film screens for six decades, actor Ed Asner will be making a rare stop in New Orleans starring for two nights only in a one-man play “A Man and His Prostate” at Le Petit Theatre du Vieux Carré on October 8 and 9. The play, written by nine-time Emmy and Peabody Award winning writer and director Ed Weinberger (“The Cosby Show” and “Taxi”), will allow Asner an opportunity to play a character based on Weinberger’s own experiences as a man fighting prostate cancer.

Most TV viewers recall Asner from his many roles, especially his comedic turn as gruff, but lovable news director Lou Grant in “The Mary Tyler Moore Show.” That role and the dramatic CBS series spinoff “Lou Grant,” produced by Moore’s MTM Enterprises production company, garnered Asner five of his seven Emmy Awards. Nominated for a total of 20 Emmy Awards, he is one of only two actors – and the only man – to have played the same character in both a comedy and a drama, a rare honor. He won his two other Emmys for his work in the two award-winning mini-series “Rich Man, Poor Man” in 1976 and “Roots” in 1977.

An actor who has never stopped plying his craft, Asner was recently featured in a role as a homophobic billionaire on CBS’s “The Good Wife” and was famously heard in the role of the old man, Carl Frederickson, in the Academy Award winning animated feature “Up” in 2009.

Born Yitzhak (“Etze”) Edward Asner in Kansas City, Missouri, he was raised in an Orthodox Jewish family and still maintains a Jewish identity. After a stint in the U.S. Army, Asner attended the University of Chicago in the late 1940s. He soon became involved with acting and was a member of the Chicago Playwrights Theatre Club and a founding member of the Second City Television group before a move to New York City. He cut his teeth in early TV productions, many of which at the time were broadcast live. That led to his first Broadway role in 1960 opposite Jack Lemmon and Sandy Dennis in “Face of a Hero.” The entire run including two preview performances was 31 days long and 38 performances.

His first Hollywood film role was in a small part in “Kid Gallahad,” a 1962 vehicle that starred Elvis Presley. After featured roles in several other films in the intervening years, he was cast as a police lieutenant in “Change of Habit,” Presley’s last starring role as an actor in 1969. Playing opposite the rock and roll icon in the leading female role as a nun was Moore. It was the first time that Asner and Moore worked together, although they did not share any scenes. The following year Moore began her iconic role as single female TV news producer Mary Richards working in the WJM newsroom for Asner’s curmudgeonly character. The rest is TV history.

Asner’s many film roles have included his leading role opposite Maureen Stapelton in “The Gathering,”  his portrayal of a volatile police chief with Paul Newman in “Fort Apache, the Bronx,” his many roles as Santa Claus in a succession of films, a small part in Oliver Stone’s “J.F.K.,” his depiction of Warren Buffett in “Too Big To Fail” and even playing himself in the Richard Dreyfuss-Raúl Juliá comedy “Moon over Parador.”

He is a well-known and popular voice actor, who will be featured in the upcoming release of the documentary “I Know That Voice” about voice-over actors and narrators of film.

A member of the Democratic Socialists of America, he is a longtime union and political activist, a vehement opponent of war and served two terms as president of the Screen Actors Guild. 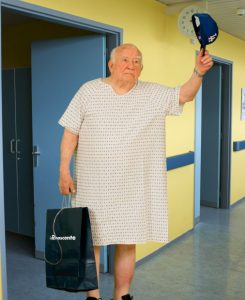 Prior to this latest work, Asner returned to the Broadway stage in 2012 to play a featured role in “Grace” opposite Paul Rudd. It was his first stage work in 23 years. He followed up with a one-man show on President Franklin Delano Roosevelt (“FDR“), but was forced to cancel the tour when he was hospitalized for exhaustion. “A Man and His Prostate” represents his latest foray into theatre.

Last week the CCJN caught up with Asner as he was driving from Nashville, Tennessee to Greenville, South Carolina to play his latest role there. He was accompanied by his daughter Liza, one of the twins he had from his second marriage, who will accompany him on his journey to the Crescent City after his October 6 show in Chicago.

CCJN: Can you tell us a little bit about the particular play, “A Man and His Prostate”? You and Ed Weinberger (the playwright) knew each other from your days working in TV production, correct?

CCJN: How was it that this particular piece was written? Was it something he wrote as cathartic piece for him to deal with his own health crisis?

Asner: It was his own and he waxed eloquent about it. It’s a beautiful piece filled with laughter and at the same time it conveys a lot of important information about prostate cancer, which thereby serves a public interest.

CCJN: They (doctors) say that if men live long enough, they will all develop prostate cancer.

Asner: Yeah, I gather he did.

CCJN: That’s an honor then.

CCJN: What do you think it was of you as an actor that made him want to write it for you?

Asner: Well, the character bitches a lot in the course of the play and I think he thinks I’m a good bitcher.

CCJN: (Laughing) Or if it’s a Jewish character a kvetcher.

CCJN: Does the character have any Jewish resonance or is he a generic male?

Asner: No, no, no. He reflects his “Judaic-ness”…every five pages.

CCJN: You’ve been doing this how long now?

CCJN: How long is the run scheduled?

Asner: We’ll finish this particular leg in Flat Rock, North Carolina and be home on Wednesday and then we’ll go out later in the year. We’ve got a couple of performances in New Orleans (October 8 and 9).

CCJN: (Excited) Which is where we are.

CCJN: We’re looking forward to it. I guess the title (“A Man and His Prostate”) pretty much sets the tone for the piece. It does have a lot of comedy in it, but it is a serious subject.

CCJN: Do you enjoy the work on stage? We know you had done “Grace” prior and several other pieces, but this is a one-man show so you don’t get to play off any other characters.

Asner: Well, I deal with them on the phone and through my descriptions of them, but nobody on stage with me.

CCJN: Is that something you find more challenging to remember all of your lines rather than playing in an ensemble cast like when you were in “Grace”?

Asner: Well, I did four years touring with a one-man show on F.D.R. We hit every little burg in this country. After four years, Ed came along with this script and it was a very joyful replacement.

CCJN: We know New Orleans is looking forward to seeing you. Have you been to New Orleans prior?

Asner: Yeah, but I can’t remember when.

CCJN: That could be an indication that you had a good time. The fact, though, is that the work has a Jewish star and is written by a Jewish writer, so it naturally has interest in our small, but dedicated Jewish community.

Asner: Yes. It has a Jewish prostate.

CCJN: Thank you for your time. Please drive carefully and L’Shana Tovah.

Asner: Thanks. L’Shana Tovah is right.

By ANGELA MAONE, Exclusive to the CCJN

The American Jewish Press Association (AJPA) announced yesterday, July 2, the election of CCJN editor Alan Smason as its new president, only the second time in its 76-year history that the organization’s top...
Continue Reading ⇒