When she first met Bessie Margolin, Marlene Trestman had no expectations. It was, after all,  an arranged meeting by a mutual friend at Isidore Newman High School. An introductory letter in the summer of 1974 suggested the two might find mutual interests to share. Trestman, a recent graduate of the tony, private Uptown school, knew she and Margolin had some common bonds. Trestman was at that time one of the last modern orphans to attend the institution originally founded by its namesake in 1904 as a manual school for Jewish students and foundlings.

Marlene Trestman, an Assistant Attorney General for the State of Maryland, looks over notes and photos she is preparing for her upcoming book on the life of attorney Bessie Margolin. (Photo courtesy Marlene Trestman)

Margolin, a successful Washington, D.C. attorney, who had risen to the rank of Associate Solicitor of the Department of Labor, had started out life in Brooklyn, but moved to New Orleans with her parents as a toddler. When her mother died in 1909, she and her siblings were classified as “half-orphans.” With their father unable to support them properly, they entered the Jewish Orphans’ Home, located on the site of the present Jewish Community Center, and became students at Newman, exactly 100 years ago. Margolin graduated from Newman in 1925 and received a scholarship to Newcomb College.

Like Margolin, Trestman had moved to Baltimore to begin her college studies at nearby Goucher College. She had no idea this one meeting would forever change her life and mark her consequence as an attorney and now, as fate would have it, an author.

Margolin was enthusiastic and happy to meet this energetic and idealistic academician. Perhaps it was because she saw something in her that reminded her of herself as a young woman preparing to embark in the study of law, a field that was all but exclusively filled by men. 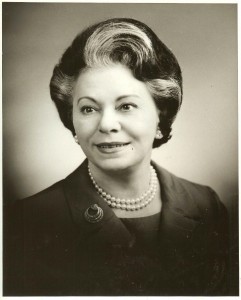 That Trestman was interested in the study of law, too, created an opportunity for Margolin to mentor and advise her young prodigy. As Trestman advanced in her academic studies and was accepted to George Washington University Law school, they became even closer and Margolin took an almost personal interest in her progress. Even in 1978, when she was accepted to “G.W.,” the field of law was still largely dominated by men. Yet, it was through the major advances turned in by Margolin and others like her that opportunities for women to advance in legal careers became possible.

Trestman was intrigued by Margolin. She was not just a role model for her. She was a pioneer. Trestman had never before met a woman attorney. “Our relationship continued through college,” Trestman reminisced recently in an exclusive CCJN phone interview. “I saw her for lunches and we would talk.”

Throughout the process Margolin became a confidante, a mentor, but most important, a special friend to the young woman. As Trestman learned more about her, she knew that Margolin would serve as an inspiration in her own life and would make a wonderful subject for a biography.

After graduation, Trestman informed Margolin of the judicial clerkship she had received with Judge Peter Beer. It was my first job out of law school,” Trestman recalled. ” I remember telling her and her being very pleased.”

Throughout the time they shared lunches, dinners and attended events, the two grew closer. “Clearly, she was a generous person and took me to nice restaurants,” Trestman reminisced. But it was her class and sensibility in dealing with the rigors of being a woman working on a man’s turf that struck Trestman.  “She was the most gracious and dignified woman I ever met,” she said.

Trestman clamored to learn more about her. She knew it was Margolin who arranged a private audience with a Supreme Court Justice every year as part of the ninth grade Washington, D.C. trip taken by Newman students. But when she began to learn more about Margolin’s career, that impressive feat seemed to somehow pale in comparison to others.

It turned out Margolin accepted the scholarship to Newcomb, but quickly determined Tulane was the place she wanted to be if she were to pursue a law degree. She transferred to the school and received her undergraduate and law degrees.

“She was the only woman in her class and the first woman to receive the Order of the Coif membership when she graduated (from law school),” Trestman noted.  Later, she was hired as a research assistant to prominent professor Ernst Lorenzen at Yale Law School.

She received a Sterling Fellowship at Yale, the first time a woman had been awarded one,  and elected to pursue a doctorate degree in law. The next year she became the first woman attorney working at the Tennessee Valley Authority in the Roosevelt administration. One of her major tasks was to fight legal challenges to the act which created the series of dams and levees  that provided hydroelectric power to a vast area there.

Trestman felt these were significant accomplishments, but Margolin was ready to cast a shadow over all her previous work when she changed jobs to work for the Department of Labor. Her work on the Fair Labor Standards Act 75 years ago as a young woman and her work on the Equal Pay Act 50 years ago as a a middle-aged lady are both considered some of the most important legal work ever conducted on  the subject.

Bessie Margolin photographed on the steps of the Supreme Court building with the Capitol in the background. (Photo courtesy Marlene Trestmen)

Not surprisingly, she considered her career first and never married and following World War II, she was called upon for her expertise that made her feel proud as an American, as a woman attorney and as a Jew. “Lent” by the Labor Department, she was assigned to the Nuremberg Trials, where, Trestman learned, she devised the rules and procedures for all of the Nazi war crimes Subsequent Procedures, the panels that tried the lesser known Nazi criminals under military code.

It was 20 years ago, as Margolin’s health was in decline that Trestman decided to act on her impulse. At a Homecoming event in 1993 she spoke about important alumni and focused on Margolin. Margolin was not able to attend due to poor health, but the germ of a tome about her life had already begun to take shape in Trestman’s mind.

Through the next 20 years, Trestman has continued to do more research on her life, combing through her own private papers and those of relative as well as the papers of Margolin’s contemporaries to glean more about her remarkable achievements and to determine what others thought of her.

“She never gave an oral history and never kept a diary,” Trestman explained. “Putting these pieces together was incredibly discreet and guarded.” Trestman called the investigative aspect of her work akin to “finding needles in other people’s haystacks.”

She has left few stones unturned “I’ve been finding references about her where I knew where she was,” Trestman continued. “For example,  buried in the Harvard Schlesinger Library are the (organizational) pages for the National Orgranization for Women. I couldn’t quite figure out what she was doing there,” Trestman related.

The sparse minutes that were taken that day confirmed to Trestman of Margolin’s import to that institution. “She wasn’t a mere observer,” she pointed out. “She was actually an actor and a participant to history.”

In the past two decades Trestman continued on the project even when her own career blossomed. She now serves as a special assistant to the Maryland Attorney General.

While shopping the project, an agent offered Margolin’s story to several publishers, but despite her dedication to the project the unknown and unproven attorney-cum-author received a drawerful of rejection letters. The few offers that did come in were not to her liking. So, she continued to refine her work and hoped that one day a major publishing house or university press would express interest.

As the project took on a life of its own, she decided to write a short story on Margolin’s life for the Journal of Supreme Court History. The article “Fair Labor: The Remarkable Life and Career of Bessie Margolin (1909-1986)” was published in the April, 2012 edition of that publication.

Earlier this year Trestman received notification that it had been selected as the winner of the Hughes-Gossett Prize for the best article published during the previous year.

For her effort Trestman also picked up a $1,500 cash stipend. She received acknowledgment at the Supreme Court by Justice Samuel Alito at the recent Supreme Court’s Historical Society Gala Dinner on June 3, where she was also presented with a piece of marble from the Supreme Court edifice.

But the biggest moment in the author’s career came last August when LSU Press announced Trestman had been offered a contract to submit the entire work of Margolin’s life and career for possible publication by them. Trestman has been moving ahead as best her time affords her, finalizing the work, which she calls a work in progress.

“I expect to have the manuscript in acceptable form to LSU Press by no later than January 1,” she promised.

Next Friday,  June 28, Trestman will deliver the Donald S. Shire lecture at the U.S. Department of Labor in Washington, D.C., at 1:00 p.m. The speech is timed to coincide with the 100th anniversary of the Department of Labor in addition to recognizing the 75th and 50th anniversaries of the Fair Labor and Equal Pay Acts, respectively, for whom Margolin worked tirelessly.

Trestman confided that she is “terrified,” but recognizes the nature of the honor. “It’s a bit overwhelming because I feel to talk about her in her home turf is both overwhelming and humbling,” she said.

Margolin was one of the first women admitted to appear before the United States Supreme Court. According to Trestman, she argued 24 cases before that august body.

When it was Trestman’s turn to be admitted to appear before the nation’s highest court, she wanted Margolin to be her sponsor, but she was unable to do so due to her declining health. As it turned out, Trestman was admitted on the first day that Supreme Court Justice Ruth Bader Ginsburg, another famous Jewish woman attorney, ascended to the high court.

Were it not for women attorneys like Margolin, Trestman asserts, the role of women on the Supreme Court might also be what it is today. More recently, Trestman was able to speak to Ginsburg at an event and confided to her that it was a very special day for her.

Trestman said Ginsburg turned to her and said, “It was a very special day for me too.” It is possible – at that every moment – that Bessie Margolin smiled in heaven.

“Fair Labor: The Remarkable Life and Career of Bessie Margolin (1909-1986)” will be considered for publication by Louisiana State University Press. For more information, go to Marlene Trestman’s website here.