Satchmo and the Star

By ALAN SMASON, Exclusive to the SOURCE 5775

Perhaps there is no greater period of Jewish influence on jazz as when it first sprang up on the streets of New Orleans in neighborhoods before and after the heyday of ragtime. In particular, one area – the Third Ward – encompassing much of the present day Central Business District, would go on to prove to be especially noteworthy in the fostering and development of what we have come to know as jazz. 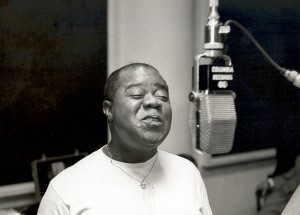 Tulane University’s Hogan Jazz Archive curator and author Bruce Raeburn and writer and historian Jack Stewart have both researched the area extensively and reported its importance.

Largely settled by immigrants, the area attracted both laborers and skilled tradesmen. In particular the 400 block of South Rampart Street was home to
a great many Jewish families, many of whom established trade as pawnshop owners or, as they were commonly called, loan offices.

Among the Jewish families who had businesses, according to Stewart, were the related families of the Fertels and the Finks; the Finks’ in-laws, the Franks; the Pailets; the Itzkoviches and the Karnofskys.

This neighborhood was also home at that time to a young, impressionable Louis Armstrong.

While Louis Armstrong identified as a Baptist, it may surprise a great many music lovers to learn that the “goodwill ambassador to jazz” wore a Magen David, or Star of David, throughout most of his adult life. The background to this little- known tale makes for fascinating reading and is steeped in the culture of New Orleans.

Some modern historians like Stewart refer to this district as “Black Storyville” in an attempt to differentiate it from its white musical melting pot and more well-documented cousin as well as to distinguish it from the entirety of Back O’Town.

Situated in the present-day area near City Hall and Duncan Plaza, this was the African-American red-light district where brothels and music halls like the Funky Butt Hall sprang up. Buddy Bolden, the first acknowledged jazz star reportedly played there, not far from Armstrong’s modest home. Abandoned by his father and with a mostly-absent mother, Armstrong was raised in large part by his grandmother. He longed for family at a time when children were not very protected.

Morris Karnofsky, the boy who advanced Satchmo the money for his first cornet, pictured exclusively for the first time in the CCJN. (Photo courtesy Jacob Karno)

Among his earliest of jobs, Armstrong toiled as a laborer with the Louis Karnofsky family of Jewish-Lithuanian peddlers. Part of his duties included getting up early and delivering “stone coal” from atop a delivery wagon with Louis’s son, Morris. It was hard and dirty work, but the Karnofskys’ work ethic impressed the youngster as he related in the biography “In His Own Words”: “The Karnofksy boys were all fine young men, wonderful dispositions. The whole family had that fine warmth for all their Negro help,” Armstrong wrote. “The Karnofskys would start getting ready for work at five o’clock in the morning and I was right there along with them.”

Elsewhere he wrote: “Working for these fine people, I learned to be an early riser, just like them. I noticed they believed in being on the move. Up early every morning…making Hay while the Sun Shined.”

From the way Jews were commonly mistreated by other whites, Armstrong had an intuition that blacks and Jews had similar prejudice to overcome and needed to stick together. “I had a long admiration for the Jewish people. Especially for their long time of courage, taking So Much Abuse for so long,” he wrote.

It is well known that Armstrong embellished a story or two, even altering the actual August 4, 1901 date of his birth to coincide with the more patriotic date of the Fourth 0f July, 1900. But the story of how he got his first cornet has remained constant.

“One day when I was on the wagon with Morris Karnofsky – we were on Rampart and Perdido Streets and we passed a Pawn Shop – which had in its Window an old tarnished beat up’ “B” Flat Cornet,” he wrote.

Stewart identified that shop as having been run by Jacob Fink.

Armstrong continued: “It only cost Five Dollars. Morris advanced me two dollars on my Salary. Then I put aside Fifty Cents each week from my small pay – finally the Coronet was Paid for in full. Boy was I a Happy Kid.”

Although the dates when Armstrong secured that cornet are in dispute, he always had a special relationship and good memories of his time spent with the Karnofsky family.

Tilie (Ester) Karnofsky (ca. 1936), who taught Louis Armstrong how to sing, published exclusively for the first time in the CCJN. (Courtesy of Jacob Karno)

They not only encouraged him to play, but to sing as well. According to Armstrong, Esther “Tilie” Karnofsky, Louis’ wife, often sang songs such as Russian lullabies. “When I reached the age of Eleven I began to realize it was the Jewish family who instilled in me Singing from the heart,” Armstrong recalled. “They encourage me to carry on.”

At dinner time, Mrs. Karnofsky would invite the young boy to have dinner with the family and Armstrong claimed he developed a taste for Jewish food that continued many years later into his own home.

In his book titled “Satchmo: The Genius of Louis Armstrong,” author Gary Giddins quotes Armstrong as saying “I still eat their food, matzos, my wife Lucille keeps them in her breadbox.” Obviously, the invitations to dine with the Karnofskys were extended during the week of Passover too.

Because of that relationship and support, Armstrong always felt a special attachment to his “Jewish family.” He maintained his friendships with both Morris and another brother, Aleck, many years after he had moved permanently to Queens in New York.

Perhaps to remind him of his humble background and his halcyon days with his “Jewish family,” the jazz star constantly wore that Magen David.

His longtime Jewish manager Joe Glaser claimed it was he who gave him that jewel. Glaser, a shady character from Chicago with convictions as a rapist, pedophile, racketeer and bootlegger, seems like an unlikely choice to manage “Satchmo.” But Glaser was someone in whom Armstrong could place his trust.

“I always admired Mr. Glaser from the first day I started working for him,” Armstrong recounted. “He just impressed me different than the other bosses I’ve worked for. He seemed to understand colored people so much.” 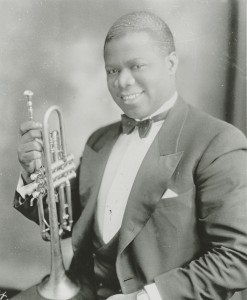 With his ex-wife Lil Hardin suing him for support, previous managers clamoring for him to perform more dates and a financially disastrous European tour, Armstrong was looking to make a change in management that would uncomplicate his life. Glaser, who took over as his manager at the beginning of February in 1935, quickly put Armstrong’s finances in order, according to Joshua Berrett in his study “The Louis Armstrong Companion: Eight Decades of Commentary.”

In a few months, Glaser had gotten creditors off Armstrong’s back and had signed a lucrative recording deal with Decca Records and its American label founder Jack Kapp, yet another successful Jewish innovator. Kapp’s founding of the label the previous year with British banker and investor Edward Lewis resulted in their signing of Bing Crosby, perhaps the hottest crooner on the scene and on the verge of a lucrative movie career. Armstrong’s signing followed several other notables including Al Jolson and New Orleans’ own innovative Boswell Sisters.

Notwithstanding his past dealings, Glaser proved to be the right fit for Armstrong, who was the first major celebrity signed to his Associated Booking Corporation. At the time of Glaser’s death in 1969, his sizable stable of performers included Barbra Streisand, Dave Brubeck, Pearl Bailey, the Rascals, Miriam Makeba, Creedence Clearwater Revival, Stan Kenton and Duke Ellington to name but a few.

As Armstrong was wont to do, he refuted Glaser’s claim about the Magen David in a 1954 interview in which he said he was presented the gold necklace as a gift from friends Abe and Frances Donen. Donen, a Los Angeles area (Baldwin Hills) jeweler friend, inscribed it with “Best of Luck, Abe and Francis.” On the front it was inscribed with his nickname “Pops.” In that interview Armstrong asserted he never took it off. The fact that he wore it daily is supported by additional photographic documentation on the few occasions when Armstrong did remove his shirt.

Several famous photos taken by noted photographers at recording sessions as well as the fledgling paparazzi of the day attest to this. One of these was Austrian émigré Arthur Fellig (aka “Weegee”), whose father was a rabbi. A popular crime photographer in New York, Weegee’s photographic essays “Naked City” and “Naked Hollywood” became best sellers.

Several of Weegee’s photographs of a shirtless Armstrong wearing his Magen David in New Orleans when he may have been preparing to rule as King of Zulu in February of 1949 are found in a permanent exhibit at the International Center for Photography in New York.

One snapped during a recording session of “Louis Armstrong Plays W. C. Handy” can be found at the Louis Armstrong House Museum in Queens (and is seen above).

Howsoever he obtained the Magen David, this Jewish connection to Louis Armstrong – the man jazz historians credit with the most profound influence on the development of jazz – cannot be understated. Jews figured prominently throughout his life and helped to fashion and direct his remarkable career from jazz’s formative days on the cobblestone streets of New Orleans to its golden era, as it spread out nationwide and beyond.

(JTA) – Israeli Prime Minister Naftali Bennett won’t run in his country’s upcoming elections this fall, his office announced Wednesday, after he served as head of a fragile, now collapsing Knesset coalition for a little over a